The smart position motor system includes a brushless DC motor with position sensing function and a device which controls its position, achieving savings in energy and resources.

Ricoh has developed a DC motor control technology to achieve low power consumption and reduced size and weight, without losing the functions and performance of a conventional stepping motor; it is mounted on Aficio MP C5502 color MFPs, released in 2012．This technology solved the problems of losing steps, high-frequency noise and subsonic vibration inherent in stepping motors; it also significantly lowers the rise in motor temperature. Its immunity to losing steps made it possible to achieve free movement of the motor.

Heretofore, Ricoh has employed the following motor types. Brushless DC motors have favorable features in efficiency, weight and size compared with stepping motors. The brushless DC motor, however, requires a sensor and feedback control to achieve the positioning function.

When driving a stepping motor by open-loop control, the output current must be set allowing a large safety margin against actual mechanical load torque so as to avoid losing steps. This causes a significant power loss. 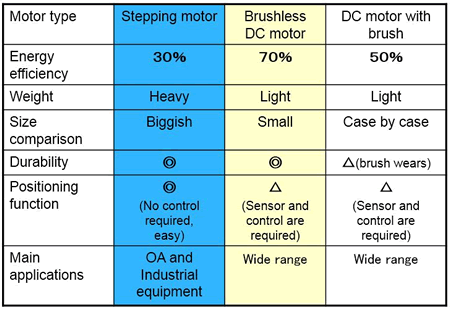 Table 1. Characteristics of motors Ricoh has adopted in the past
(Note: Stepping motor is driven at a constant-current and by open-loop control)

We adopted a low price microcomputer for the control circuit, but included our unique control algorithm firmware, which achieves high precision control.

Further, we focused closely on safety, including a fail-safe algorithm.

Up to four control parameters can be set, also taking into account the intensification of control ICs.

Interface compatible with pulse (clock) input type stepping motor driver is available, which allows evolution to models with minor changes without changes to the host system. 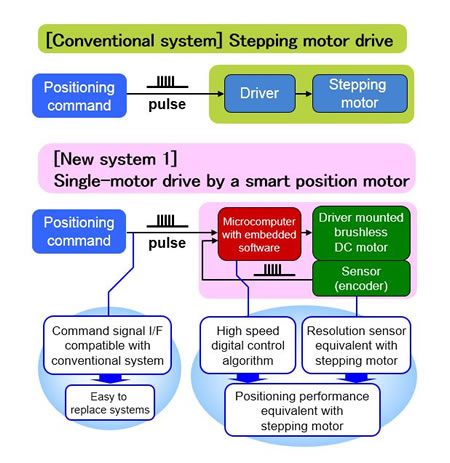 We have developed a multi-shaft control system, which can simultaneously control multiple motors independently. The system is mounted on RICOH MP C8002/C6502 series and RICOH MP C6003/C5503/C4503/C3503/C3003 series color MFPs released in 2013, and their successor products. The system is also mounted as paper feed motors on their peripherals such as document feeders, finishers and large capacity trays.

In order to respond to the need of a new control system to control multiple motors simultaneously, while conventional system controlled every motor with each microcomputer, we have developed two kinds of custom control ICs, five-motor control type and eight-motor control type. This enabled to deploy energy and resource saving effect, the feature of smart position motor, also to the models adopting multiple motors, and to achieve bigger energy and resource saving effect at low cost. 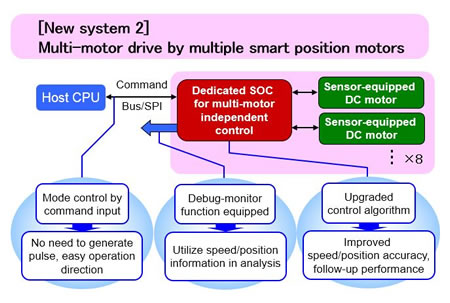 Ricoh has developed a driver IC for brushless DC motors, which generates encoder signals from Hall element signals. In the past, a position detecting sensor such as an encoder and a motor driver IC were two separate parts. Their functions are now integrated on a single motor driver IC to save space, reduce cost, and increase environmental robustness. Motors featuring this driver IC are now usable in environments where optical encoders pose a concern. The energy and resource conservation effects of the smart position motor system are now available for many more products and models at a low cost. 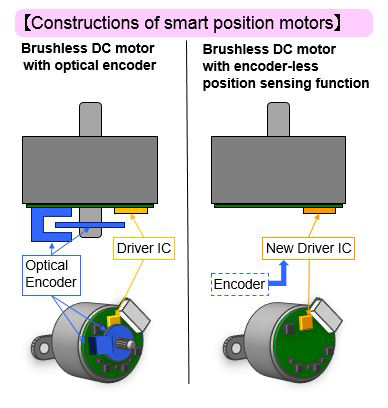 2. Characteristics of the motor driver IC 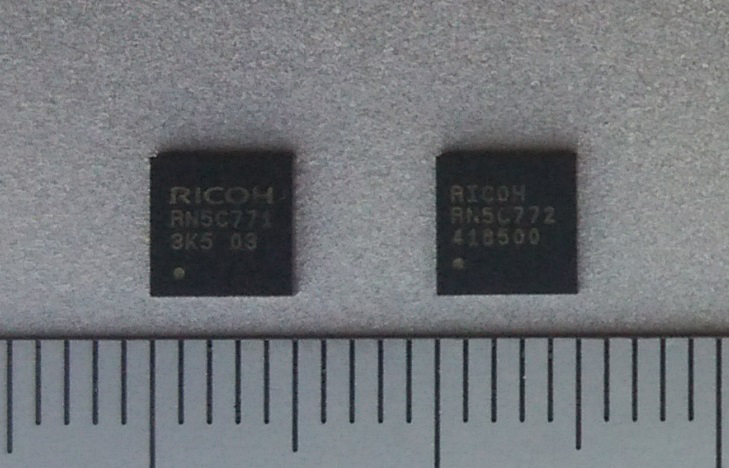