NHK’s “NIGHT OF THE MAKAIZO SOCIETY”

NIGHT OF THE MAKAIZO SOCIETY

In this technology development entertainment program on the NHK TV channel, top-notch engineers compete on the most extreme ideas and techniques. Children’s toys and everyday appliances are transformed into nasty monsters at this exciting and inspiring soiree.
This fourth installment featured “DVD player bowling” and “penguin long jump roping.” Engineers from major copier and office equipment manufacturer Ricoh Group took on the challenge of magically repurposing appliances in just 40 days. 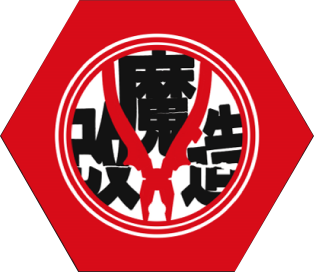 Five stuffed penguins were modified to see how many jump rope repetitions could be done in one minute. Ricoh set a high goal of 240 jumps per minute, and the developers of the machine and the athletes who spun the rope worked together to achieve the record.

“PEN” from penguin,
“PENTA” expresses the number five in Greek, and the crossed X formation was combined for the PENTA-X name reflecting attachment to Ricoh’s camera brand. PENTA-X viewed from above 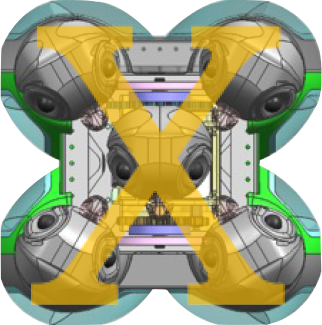 To achieve the function of skipping rope quickly and in large numbers, the behavior of the rope was thoroughly analyzed to derive rope-spinning conditions with minimal variation and the required specifications for the penguin. 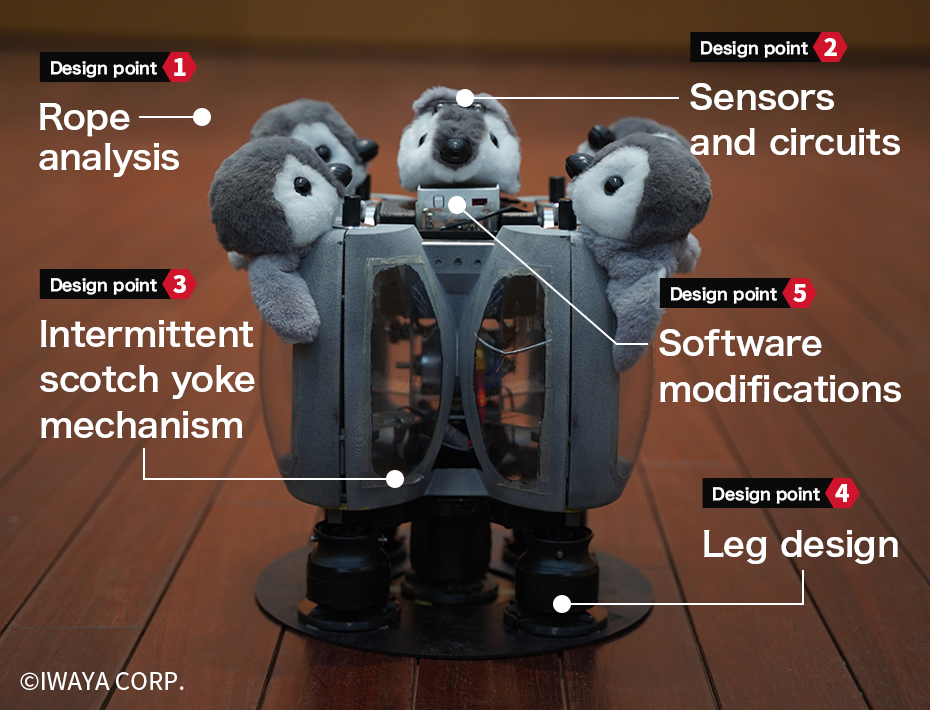 Rope analysis to find the best conditions for spinning the rope

The behavior of the rope was analyzed using motion capture, which is also used to analyze the motion of industrial robots. The optimum dimensions for PENTA-X and a way to spin the rope with less bounce were derived through repeated experiments.

Photoelectric sensors were installed in two locations to precisely switch jumping on and off. The sensors used for paper detection in multifunction printers were utilized to achieve high responsiveness.
Isolated control circuits for high output motors provided high noise tolerance and responsiveness.

To provide stable and high jumping force even in a compact form that fits within the spinning rope, a simple mechanism was used to convert rotational motion into linear motion. The device maintains balance and jumps straight up by rotating both arms in opposite directions.
By arching the link and making 1/3 of a rotation (120deg) to be a dead zone, the time required for jumping was reduced, enabling high-speed jumping. 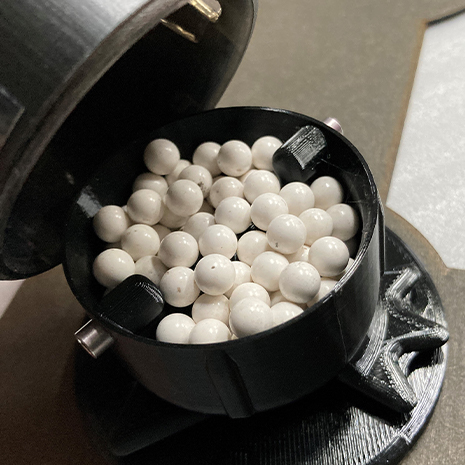 Leg design that can keep pace even when jumping high

Built-in BBs disperse energy to ensure stable landing even after high jumps. The impact is absorbed, and the device can immediately get into position for the next jump.
Effectiveness was successfully maximized by incorporating and materializing unbound ideas that referenced the technology incorporated in products and things in the surrounding world.

A compact control microcomputer with sufficient response speed was employed. And a user interface was implemented to allow anyone to easily change parameters such as the time from sensor reaction to motor driving and the motor output. Parameters can even be tuned while spinning the rope. 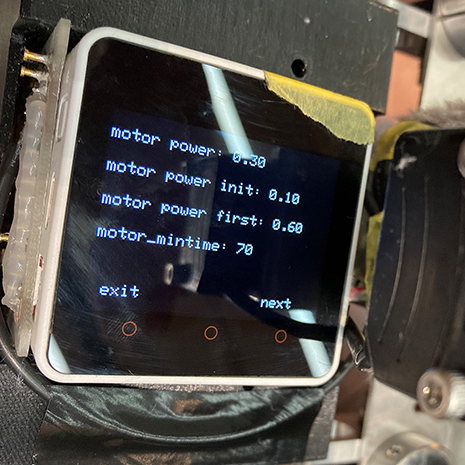 The goal was to see how many bowling pins placed 25 meters away could be knocked down by a DVD launched by pressing a DVD player’s eject button after playing for 30 seconds or more. Ricoh took on the challenge, making full use of its analytical technology combined with its expertise in paper transport technology used in copiers/printers (multifunction printers).

The THOOTA-R name comes from the wish to achieve a trajectory similar to a soccer shot. That aim started the development; the device was initially nicknamed “Shooter-kun” by team members. THOOTA also infers an affinity to the well-loved RICOH THETA series of spherical cameras. And finally, an R was added for “Ricoh,” or as a machine that shoots a DVD-“R.” 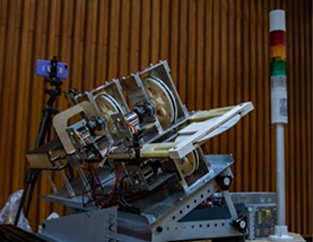 Rooted in Ricoh’s strengths in copier/printer (multifunction printer) paper transport mechanics, the results of many trial shots enabled the team to hone the parameters to minimize quality distortion as much as possible. To achieve that, the design was changed to allow for the adjustment of individual parameters. For example, sensors and microcomputers can variably and precisely control the motor speed. 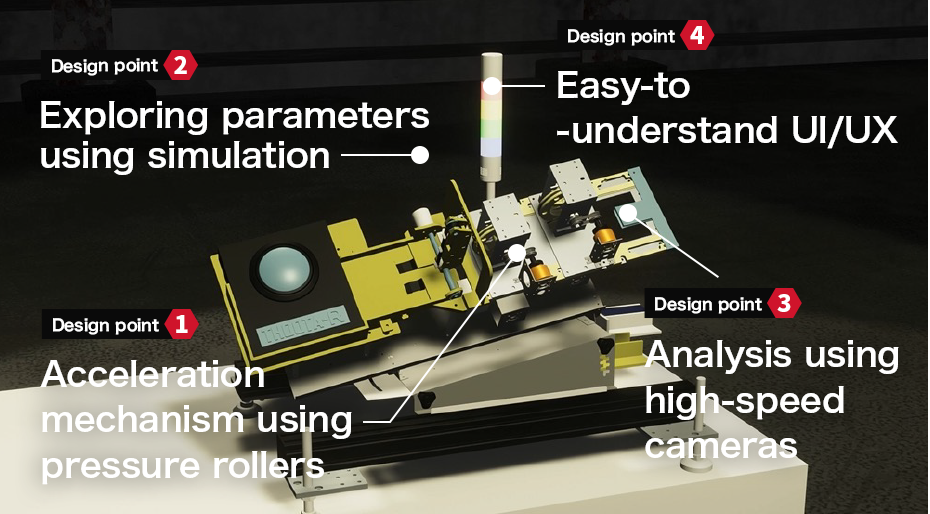 The materials used on the front and backside of a DVD are different. Slipping occurred between the DVD and rollers as the roller rotational speed increased, making the DVD unable to fly far or a consistent distance. The paper transport mechanism of multifunction printers was incorporated; the DVD was pinched between upper and lower rollers, and pressure was applied to the upper rollers using springs.

No actual machine or evaluation environment was used in the initial development stages, making it challenging to determine the speed and disc rotation targets. A physics simulator created a simplified evaluation environment and defined the targets. That simulator also effectively evaluated parameters that were difficult to observe with actual equipment, such as the aiming trajectory for the pins and disc rotations. Ricoh commonly uses simulation to analyze toner and inkjet behavior.

If the disc’s trajectory is inconsistent despite using identical parameters, there may be unanticipated abnormalities between the disc and acceleration rollers. Those differences would be unnoticeable to the naked eye but are easily seen and measured when recording using a high-speed camera at 1/4000 speed. The accuracy was improved by analyzing the images and data and then adjusting the pressure rollers and rail mechanisms.

A microcomputer with a monitor was used to adjust the roller speed easily. The easy-to-understand UI design also prevented operational errors during the actual demonstration. A signal light tower was attached to the device to improve safety and easily see from a distance when a disk would be ejected. The signal tower used was the same as those on commercial printers.

Tsukuroom Ebina is Ricoh’s manufacturing fab space. It was established in 2020 and has been active as a bottom-up proposal with the aim of increasing the number of employees who think while doing and fostering a mindset capable of creating innovation. Specifically, it has a variety of equipment and tools, including 3D printers, laser cutters, and cutting machines, and it holds regular workshops so that even beginners can use them. The management team provides follow-up support as needed. 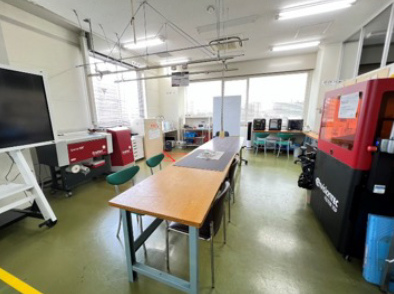