We need to reduce the environmental impact of mankind's economic activities to a level that the Earth's self-recovery capabilities can deal with.

The purpose of environmental conservation activities is to reduce environmental impact to a level that the Earth's selfrecovery capabilities can deal with and sustain the global environment. The Ricoh Group, by considering how the relationship among the three Ps (planet, people, and Prosperity) in environmental, social, and economic activities has changed over time, defines the kind of society we should pursue and carries out its responsibility as a company to create such a society. 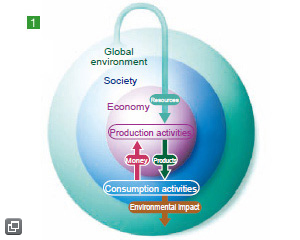 In ancient times, people led their lives simply as members of natural ecosystems. Their activities depended on the availability of the bountiful resources of the Earth. Before the Industrial Revolution, the environmental impact of mankind's economic activities—which involved the consumption of natural resources such as water, air, and organisms—was limited and small enough for the natural environment to recover unaided. 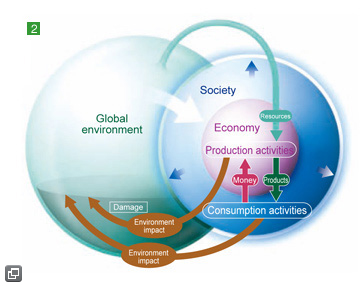 The Industrial Revolution started in 18th century England and spread around the world quite rapidly. Industrialization symbolized a rich society, and people shifted toward a new energy- and resource-intensive lifestyle. It was the beginning of an age of mass production, mass consumption, and mass disposal. The environmental impact resulting from such human activities has increased significantly.
The changes in society also brought with them some adverse consequences including pollution in many places around the globe. People had to face up to problems such as waste disposal along with air and water pollution. In retrospect, these early problems were a prelude to modern global environmental problems. In those days, however, the problems were handled locally, not globally.

Clarion call for the future of the global environment and humankind 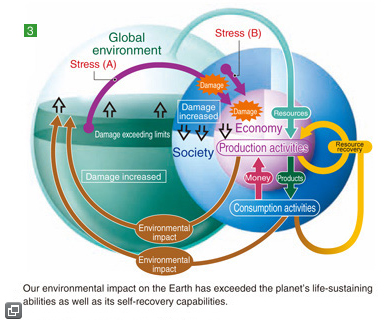 At the end of the 20th century, it became evident that damage caused by the increasing environmental impact affected our lives on an international level, rather than merely on a local or national level. A growing number of people began to warn of environmental deterioration and its direct impact on our economic and social activities. People finally started to become mindful of the fact that our economic activities had inflicted greater damage to the natural environment than its self-recovery capacity could deal with; and this excessive strain on the global environment was the root cause of many problems, such as global warming and other climate change phenomena, resource depletion, environmental pollution, and a decrease in the biodiversity. It became widely recognized that if left uncontrolled, the environmental impact we are responsible for will become a serious threat to the future of humankind.

Responses by businesses and society 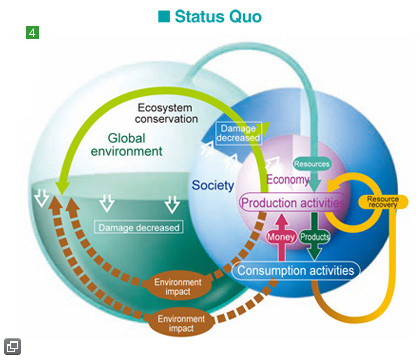 Today, people are paying more attention to activities that reduce damage to the global environment, including recycling and prevention of global warming. Business entities, the mainstay of industrialization processes, cannot gain public support if they do not deal with environmental issues more seriously. Manufacturers face such challenges as promoting smaller products with longer lifecycles, energy conservation, and resource recycling, as well as providing the maximum benefit to society and companies with minimum resources. Global companies as well are expected to support and promote the awareness of environmental conservation in developing countries and regions so that they can achieve economic progress with minimum environmental impact. People have also started to recognize the importance of increasing the self-recovery capabilities of the global environment through such efforts as improving forest ecosystem conservation.

The Ricoh Group's efforts toward achieving the ideal society 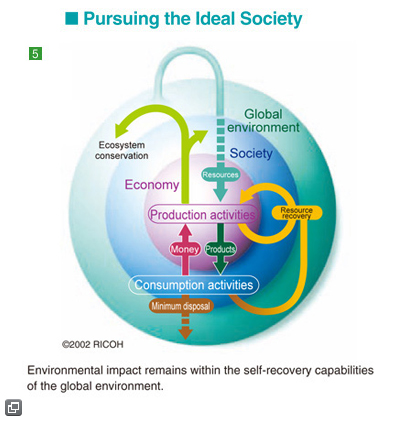 Ultimately, our goal is to help build a society in which the impact on its environment is maintained at a level that never exceeds the Earth's selfrecovery capabilities. To make this happen, more than merely implementing environmental conservation activities is necessary; society needs to formulate clear-cut long-term visions and goals that will guide the specific actions required.
At the Ricoh Group, we have set environmental goals for 2030 and 2050 as milestones toward the final goal. We also determine Environmental Action Plans every three years and promote sustainable environmental management.
In order to contribute to the future of the global environment and society, the Ricoh Group will make efforts with focus on long-term vision and clear goals.