TOKYO, July 25, 2016 – Ricoh today announced that its fully spherical camera, RICOH THETA S has been selected as the official 360-degree camera of the Ricoh Women's British Open, one of five Major Championships in women's professional golf.

The RICOH THETA S is ideal for filming sporting events. The camera enables amateur and professional photographers to capture high-resolution spherical output images of up to nearly 14 megapixels while offering mobility and portability due to its compact size and unique design.

Ricoh will be filming unique and behind the scenes content as part of its 360 View of Golf initiative, supported by Ricoh Ambassador Charley Hull. This eight week campaign can be viewed on the Championship website http://ricohwomensbritishopen.com/theta-360/.

The Championship is one of the first golf tournaments to be captured in 360 degrees. The RICOH THETA S 360-degree camera provides an all-access view to the 2016 Ricoh Women's British Open, with special features including inside-the-ropes views, behind-the-scenes clips, player interviews and press conferences that capture and share content as never before. These images will also link to the Ricoh Women's British Open official social media accounts on Facebook, Twitter, and YouTubeTM.

"Ricoh's 360 View of Golf is an innovative and exciting way to bring 360 video and stills technology to golf fans and the sport as a whole," said Ross Hallett, IMG Championship Director. "The Championship is delighted to support this exciting project and I believe the unique content will give fans a new and exciting insight into the Championship."

"This year marks our tenth year as title sponsor for the Ricoh Women's British Open and we are proud to continue to evolve our sponsorship," said Jake Yamashita, Deputy President, Ricoh Co., Ltd. "360-degree technology is still relatively new and offers fans an unprecedented level of engagement with the Championship, as well as a unique immersive experience from the Woburn Golf Club. We look forward to continue supporting the Tournament with our collective imagination and innovative technology."

Ricoh is one of the longest serving global sponsors in women's golf and has sponsored the Women's British Open since 2007. This is the tenth year that Ricoh has been title sponsor of the tournament, which is being held at Woburn Golf Club, England from Thursday, July 28 to Sunday, July 31. 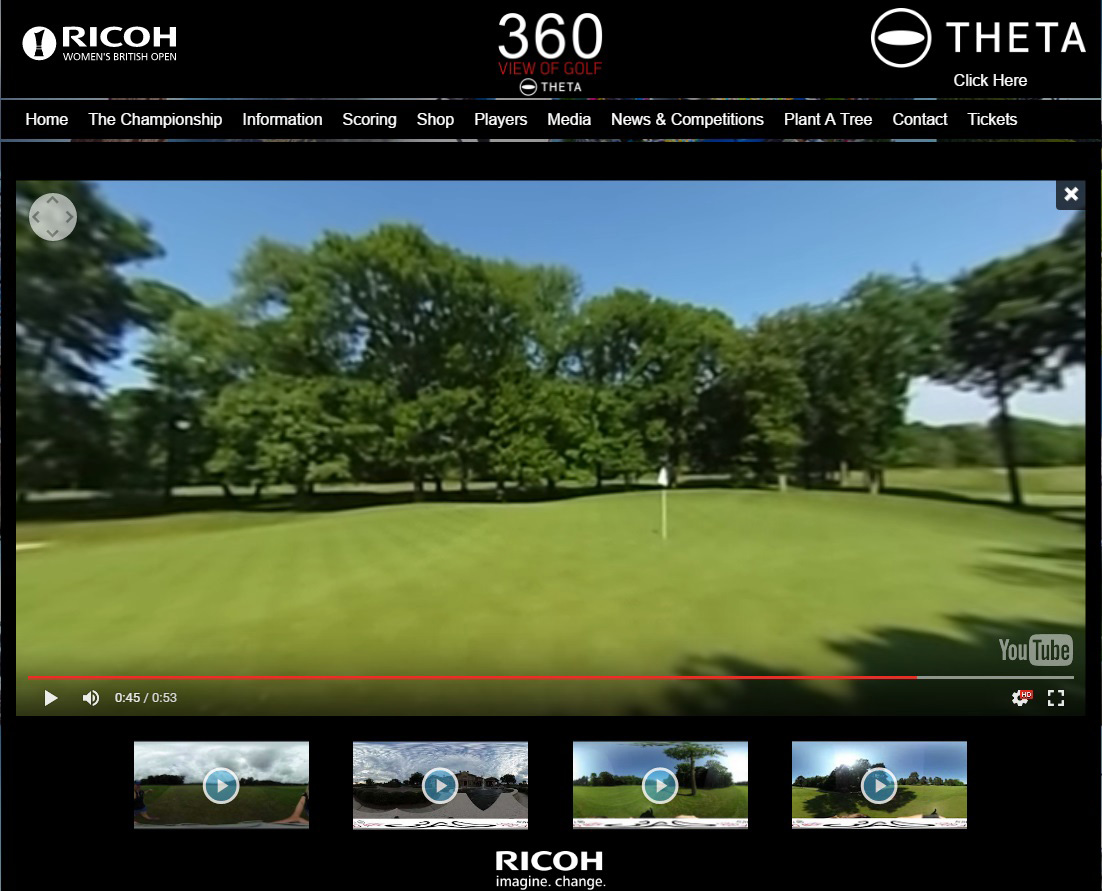 IMG is a global leader in sports, events, media and fashion, operating in more than 30 countries. The company represents and manages some of the world's greatest sports figures and fashion icons; stages hundreds of live events and branded entertainment experiences annually; and is one of the largest independent producers and distributors of sports media. IMG also specializes in sports training; league development; and marketing, media and licensing for brands, sports organizations and collegiate institutions. In 2014, IMG was acquired by WME, a leading global entertainment agency.