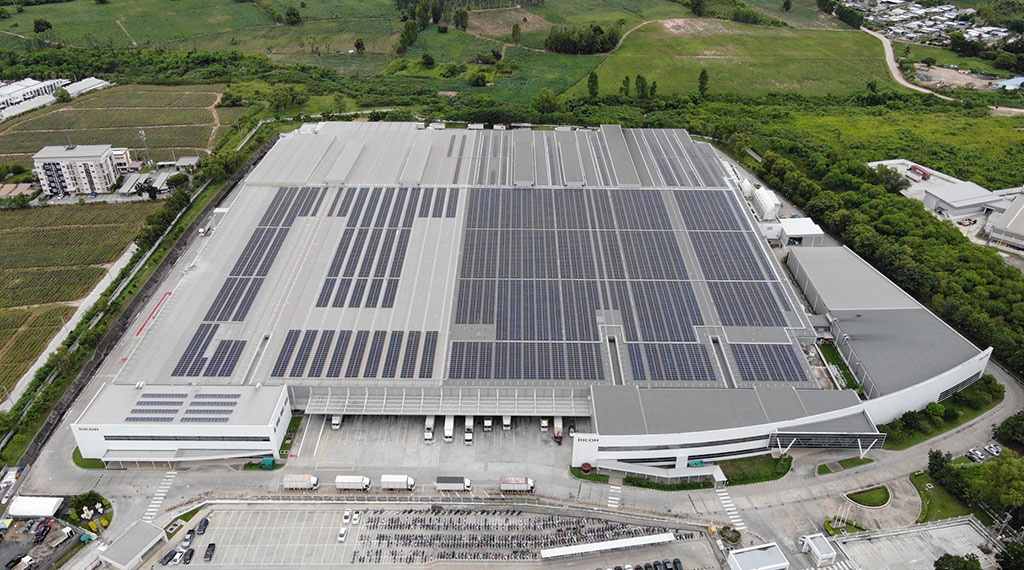 This content is excerpted from an advertisement that appeared in the Nihon Keizai Shimbun on November 18, 2021. All rights reserved.

Solar panels installed on the roof of Ricoh Manufacturing (Thailand) Ltd. This factory is 100% powered by renewable energy.

Amid the rising tide of international opinion calling for strengthened measures to combat global warming, expectations are growing as to the role of the private sector in this vital endeavor. As a management strategy, the Ricoh Group is implementing effective measures to help achieve a zero-carbon society. Ricoh is stepping up its activities in cooperation with stakeholders while participating vigorously in international initiatives.

“Driving Sustainability for Our Future,” Ricoh’s sustainability slogan established in 2014, is a call to action expressing aspirations to contribute resolving diverse social issues through business.

Ricoh established the Environment Promotion Section in 1976, almost half a century ago. In 1998, ahead of industry peers, Ricoh began advocating Environmental Management and committed to simultaneously conserving the environment while producing profits as a commercial enterprise. Ricoh is helping attain the Sustainable Development Goals (SDGs) in various ways.

In 2015, at the 21st Conference of the Parties to the United Nations Framework Convention on Climate Change (COP21) that culminated in adoption of the Paris Agreement, Ricoh served as an official sponsor at the request of the French government, reflecting its high regard for Ricoh’s environmental management initiatives. The experience at COP21 deepened Ricoh’s recognition of the global trend toward zero carbon and in 2017 it became the first Japanese company to join RE100, a global corporate renewable energy initiative. In the same year, Ricoh also announced its environmental targets, including the achievement of carbon neutrality by 2050, predating the Japanese government’s 2020 declaration of its 2050 carbon neutrality goal.

Ricoh’s sustainability initiatives are distinctive, fully integrated into the management strategy and system, and vigorously pursued under top management leadership. Jake Yamashita, president and CEO, positions ESG (environment, social, governance) targets as future financial goals because they will shape Ricoh’s long-term competitiveness. Ricoh established the ESG Committee in 2018 for management to discuss and make decisions on ESG issues. Since 2020, Ricoh has been disclosing its quantitative ESG targets, positioning them as commitments, as attested by its executive compensation linked to ESG indicators. Ricoh has identified seven material issues to be resolved and formulated 17 ESG targets associated with them. Achieving a zero-carbon society is one of the material issues. Ricoh is proactive in information disclosure and started publication of a report based on the Task Force on Climate-Related Financial Disclosures (TCFD) framework in 2021 in addition to its integrated report. Ricoh has set ambitious targets, seeking to reduce its greenhouse gas emissions 63% by 2030 compared with the fiscal 2015 level and in March 2021 raising the goal for sourcing renewable energy by 2030 from 30% to 50%, with a view to transitioning to 100% electricity derived from renewables by 2050.

Its efforts are already yielding gratifying results. Greenhouse gas emissions were down 36.5% in fiscal 2020 compared with 2015. 182 sites of 31 Ricoh Group companies around the world have already switched to 100% renewable energy. Electricity used for production of flagship A3 MFPs was entirely derived from renewables in the summer of 2019. Ricoh introduced a comprehensive evaluation system for electricity derived from renewables in April 2021 to ensure the quality of electricity sourced and completed the transition to 100% renewable energy at headquarters by leveraging this system. Its sales subsidiary Ricoh Japan is applying for Net Zero Energy Building (ZEB) certification for its new office buildings and using ZEB-certified buildings to showcase examples of decarbonization to customers. Ricoh’s decarbonization initiatives undertaken in the course of business include promotion of the energy creation and energy saving business; the products and parts recycling business worldwide; and the development of plant-derived new material as an alternative to conventional plastic.

Another unique feature of Ricoh’s initiatives is the breadth and depth of collaboration with stakeholders. For example, Ricoh Japan’s SDGs Key Person system, launched in 2018, has 414 employees registered nationwide as of October 2021. Their role is to drive progress toward attainment of the SDGs at their workplaces while also encouraging progress externally among customers, suppliers and other stakeholders, thereby acting as ambassadors for Ricoh’s initiatives to help resolve environmental, social, and local issues.

Not only does Ricoh participate vigorously in major initiatives in Japan and abroad, it endeavors to share the knowledge gained both within the organization and beyond it. Ricoh is expanding the scope of its activities, such as by making its expertise available to other companies that are considering participation in RE100. Ricoh is also active in policy advocacy and in involvement with decarbonization-related external organizations.

Through these manifold activities, Ricoh is earning a reputation worldwide as a leading enterprise championing the cause of sustainability. Ricoh has been included in the Dow Jones Sustainability World Index since 2020 and won the Grand Prix award at the Nikkei SDGs Management Grand Prix in 2020. Ricoh’s decarbonization initiatives with a business perspective will continue to accelerate.

Find out more about the Ricoh Group’s initiatives to enhance corporate value over the medium to long term.