Ricoh has established a technology that can rewrite physical distribution labels pasted on tote containers with no contact and at high speed about 1,000 times. The labels can be used repeatedly for five years or more under severe outdoor conditions; this contributes greatly to reduced environmental impact and cost. (The rewritable laser system is available only in Japan at the moment.)

This rewritable laser system won the Technology Prize from the Imaging Society of Japan in 2013.

Various systems for rewritable recording technology, as a significant technical field, have been proposed in the past from the point of convenience and reducing environmental impact. Specifically, a thermal rewritable recording medium using heat was quickly put into practical use. It has been widely used for point cards and IC cards to display numeric characters, expiry dates and the like, using a thermal printhead for the recording mode. Further, applying this rewritable recording technology to industrial applications has been explored for factory automation (FA) or physical distribution. In the physical distribution field among industrial applications, where periodical deliveries are the norm, labels with delivery address or content are printed as bar-codes or text to ensure proper delivery. These labels are pasted on tote containers for every delivery address each time. When the tote container returns, the labels are peeled off and discarded, and new thermal labels are pasted.

If these labels, which are discarded each time, are produced on a rewritable recording medium, the environmental impact can be reduced: less garbage and fewer CO2 emissions. Further, personnel expenses to paste and peel off labels can be reduced and the possible risk of physical distribution system problems caused by residual labels can be prevented. Overall, business efficiency increases. Using the thermal printhead recording mode of a contact recording system, on the other hand, it is hard to print on a medium attached to a deformed tote container (deformed through prolonged use). Beyond that, the conventional rewritable recording medium for cards cannot meet high light stability demands against direct sunlight for outdoor physical distribution applications.

Ricoh solved the problem with outdoor application under severe conditions using a unique technology. The solution has also made rewritable recording technology applicable for use in physical distribution.

Basic configuration and the features of the system Figure 1: Ricoh rewritable laser system and an example of contactless rewritable recording medium
pasted on tote containers that ride on a belt conveyor

Figure 2 illustrates the optical system for a rewritable laser marker. The laser beam (maximum output 28W), emitted through fiber optics from the laser diode (LD), forms a circular beam spot controlled by two galvano scanners, which are arranged at 90 degrees angles through optical lenses. The beam is absorbed by a photothermal material in a recording layer and heats the rewritable laser medium to 180℃ (or more) and draws a line about 0.25 mm wide on the medium. The galvano scanner changes the laser beam angle, which prints a character using vector scanning, which traces the laserbeam as if drawing with a pen. 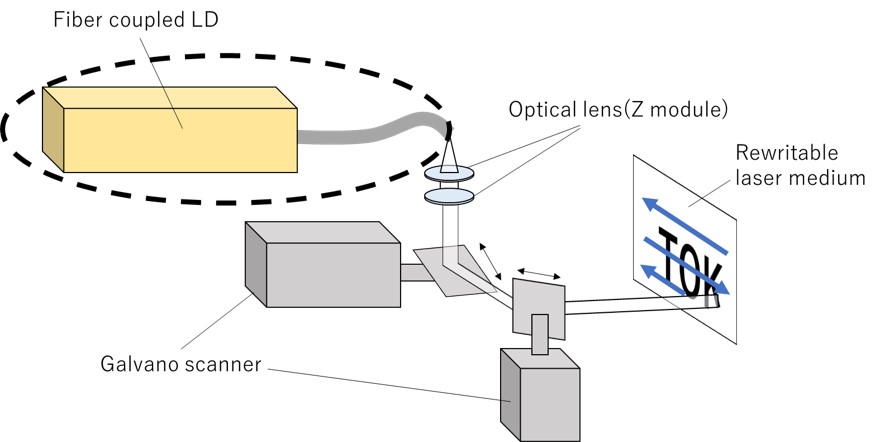 A general laser marker is a system that can print without contact on various materials, such as plastic and metal, and is widely used in production plants to print numbers and dates on products. However, the laser marker laserbeam has an optical distribution of sharp chevron shape (Gaussian distribution); when printed on rewritable medium, superfluous heat is added to the central part of the line printed. One problem with this method is that repeated printing and erasure deteriorates the medium and results in incomplete erasure.

With the Ricoh laser marker, we achieved uniform optical distribution (Top Hat) of light intensity at the central and periphery parts alike. This is done with an optical system. As a result, we can heat the line to print uniformly without adding superfluous energy to the central part of the line. This makes it possible to print at high-speed, without degrading the medium.

Device configuration and the features of rewritable laser eraser

The images on a rewritable laser medium are erased by heating at 130℃ to 170℃, which is lower than the color developing temperature. We developed a dedicated eraser to heat the entire display face to within these temperature limits uniformly and at high speed (Figure 3). The laser beam emitted from the LD bar, in which multiple LDs are arranged in a line, is synthesized by a special optical system and irradiated on a medium in the shape of a line contolled by the galvano scanner; images are erased by scanning unidirectionally with the galvano scanner. To erase uniformly, we developed an optical system to bring the laser beam output from multiple light sources to achieve uniform optical distribution on the entire display face. We also adopted the high-output LD bar with a maximum output of 108W. This has made possible about four times faster erasure compared with the method that scans the entire display face sequentially using a laser marker.

In addition, we provided the autofocus mechanism on the marker and the laserbeam scanning speed adjustment mechanism on the eraser. The purpose was to improve the practicality in physical distribution applications and to respond to deformation and various sized tote containers. Further, we have developed and introduced our unique laser energy control mechanism, by detecting medium temperature, into both the marker and the eraser.

The vector scanning and printing system, which traces the laserbeam as if drawing a line with a pen, such as by a laser marker, can form smooth character images and achieve high visibility. The visibility is higher than with the raster scan system, which switches heat on and off in pixel units, as with a thermal printhead. As shown in Figure 4, the rewritable laser marker can form various printing images to meet market requests. Figure 4 (a) shows examples of images used in the physical distribution field; images, such as bar-codes, characters and numeric characters required for supervision are printed vividly. Although the bar-code quality of horizontal bars by thermal printhead printing deteriorates, using the vector scanning method adopted in this system, equally high printing quality is secured for both horizontal and vertical bars (Figure 4 (d)).

For physical distribution applications exposed to the outdoor variation of weather or air temperature, the medium must have high light stability against direct sunlight. The conventional rewritable medium for thermal printheads (TPH) has a problem with the deterioration of image density, coloring of the base material, and incomplete erasure when exposed to direct sunlight. These results are due to the resolution of leuco dye in the recording layer by UV light and oxygen. In recording technology using the Ricoh laser diode, we form an ultraviolet screening layer above the recording layer (Figure 5). This was done by compounding a new ultraviolet absorber, which intercepts the ultraviolet region below 400 nm and achieves transmittable visible ray, taking advantage of the feature that makes it possible to form a thick layer to transmit a near-infrared laserbeam there. Further, the rewritable laser medium with high light stability was given birth by forming oxygen insulation layers to block out the oxygen sandwiching the recording layer.

Figure 6 (a) shows samples of the light stability test results with the rewritable laser medium and rewritable medium for TPH. Figure 6 (b) shows the change in image density and erased density. The light stability test is conducted with an accelerated test using xenon light irradiation; xenon light irradiation of 256 hours corresponds to five years in an outdoor physical distribution application. As shown, the image on a rewritable medium for TPH thins and the base material turns yellow after the light stability test; extreme loss of contrast also occurs. On the other hand, the image on the rewritable laser medium showed little change in the image before and after the test. The density measurement result graph in Figure 6 (b) confirms this.

Beyond that, also in bar-code properties, the rewritable medium for TPH was graded as F after the light stability test (bar code scanner is impossible to read); the rewritable laser medium maintained the C grade required for physical distribution applications. Moreover, it can be used in outdoor physical distribution applications for five or more years. Figure 6: Difference in light stability of medium between rewritable laser medium and rewritable medium for TPH

The vector scanning printing system using the laser marker to trace the laserbeam as if drawing with a pen has the advantage of being able to draw images quickly, compared with the raster scanning system, which writes characters using many dots. It also has the advantage of being able to express the outline of characters smoothly. Because of these advantages, it is widely used for FA applications. However, if the character data of the usual laser marker is used for drawing as it is on a rewritable laser system, intersection and cuff parts are heated multiple times (Figure 7). This adds superfluous heat to those parts, which reach the decomposition temperature of the material. The result is medium deterioration, which lowers repetition durability because of incomplete erasure.

If overlapping can be removed, the excessive heat rise can be solved. Although steps can be taken in creating the font beforehand to remove the overlap, as the size of character and line width changes with system setup, huge time and effort is needed to create a font from which the overlap part is removed in the right proportion. Moreover, in cases where a font is created supposing line width and character size in which there is no overlap, overlap remains or it hollows, depending on magnification of the character (Figure 8). As a result, quality falls. Ricoh established its laserbeam scanning control technology, which can draw high-quality character images without the excessive rise in temperature. This is achieved by developing character drawing data generation software, which removes the overlap part of character data automatically, depending on the size and line width of the character.
Using a rewritable laser marker that incorporates with this technology, because there is no hollow (open space) part and overlap is removed, even if characters are drawn in a different size (Figure 9), repetitive durability is achieved in addition to improved visibility.

Figure 10 (a) shows the result of repeated printing and erasure 1,000 times on a rewritable laser medium. Printing was done using the rewritable laser marker incorporating the character drawing data generation software to remove the overlap part of character data automatically. Erasure was done using the rewritable laser eraser. Figure 10 (b) shows the result of printing without overlap removal. When overlap is not removed, the intersection and cuff part remains as a black spot. When overlap is removed, however, uniform erasure is achieved even after 1,000 times, demonstrating medium durability.

(a) Printing and erasure after overlap removal

(b) Printing and erasure, without overlap removal

Effects of introduction of the rewritable laser system

This technology will enable rewritable recording, thereby helping protect the environment in wider fields and increase business efficiency. In deployment to the physical distribution field, at present, the operation system prints and pastes thermal labels on tote containers using auto labelers. These must be removed to print and post new labels, thereby discharging garbage. In the rewritable laser system that incorporates this technology, about 1,000 rewritings become possible. Because it can be used without relabeling for almost the same life span of a tote container, label waste for the duration of service becomes zero (Figure 11), and CO2 emissions will also fall by about 90% (Figure 12). This will greatly contribute to reduced environmental impact. If we can deploy this system for all physical distribution applications in Japan that presently use tote containers, we can estimate a yearly reduction of about 4,800 tons of thermal-paper labels. 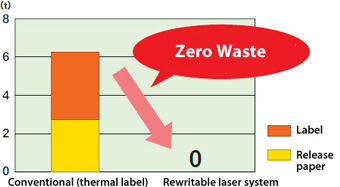 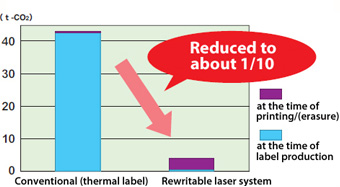 Further, because conventional thermal labels are peeled off manually, personnel expenses must be taken into account. Beyond that, because of human intervention, removal sometimes fails or is incomplete, resulting in the remaining bar-code being read, causing problems with sorting and physical distribution. Applying the rewritable laser system reduces personnel expenses for peeling off labels and does away with problems related to incomplete removal. The result is increased efficiency of logistics operations.