Artificial intelligence (AI), in which a machine itself learns, has been an area of active research and development recently.

By applying machine learning, Ricoh has developed image recognition and analysis technology which allows accurate detection of anomalies even when the number of sample images is small. Opportunities for this technology are particularly high for industrial applications.

The program using this technology received an award for excellence for the second consecutive year (in 2014 and 2015) at Visual Inspection Algorithm held in Japan, a competition of precisely detecting product defects.

Needs for automatic visual inspection in the manufacturing area

At manufacturing facilities, there is a need to classify the manufactured parts as good or defective through automatic visual inspection based on images.

Detect unknown types of defects, by learning data on only good parts

Ricoh chose to use semi-supervised anomaly detection as the machine learning method, and worked on the feature quantities used for the machine learning so that learning is possible even when the number of samples is small. In an algorithm using semi-supervised anomaly detection, system learns data on good parts only, so high identification performance can be expected even for unknown types of defects. 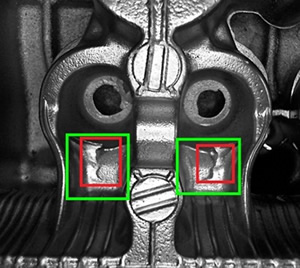 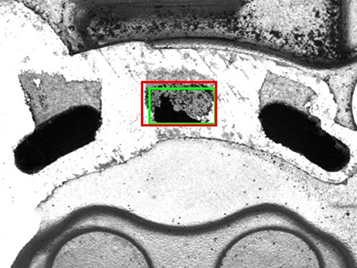 Machine learning is a method used in image recognition and analysis. In machine learning, a computer receives certain inputs, learns from them, and predicts useful outputs. As a preliminary step, the system needs to have learned combinations of certain input images and corresponding correct-answer outputs (correct-answer labels). The learning step is followed by the decision step, where the system receives a certain image input and predicts and outputs the correct answer based on what it has learned.

Generally, in supervised machine learning, data of all labels (input images and corresponding correct-answer outputs) is used for the learning. To learn how to tell good parts from defective ones, for instance, the system needs to learn using a data set that contains samples of both good and defective parts (the sample images of the parts and the labels that indicate whether they are good or defective).

Semi-supervised anomaly detection is another method of machine learning. In this method, learning is based on data of a single label only, for instance, good parts only. The data of only one label needs to be prepared, so learning can be based on a limited number of samples.

Figure 3   Difference in learning methods in the feature space

Ricoh has developed a new algorithm that combines the semi-supervised anomaly detection with feature quantities appropriately describing the shape of a target object in an image. The algorithm was applied to an image-based visual inspection in the area of manufacturing, and high-precision recognition was confirmed.

Pursuing fusion of optics and image recognition and analysis technologies

In the industrial field, Ricoh will continue to develop and deliver not only optical module products but also such system solutions involving image recognition and analysis technologies.

“The Opportunities are Infinite – Taking Imaging Technology to New Realms”