As part of an Internship Program under the ABE Initiative

TOKYO, March 31, 2015— Ricoh Company, Ltd. invited students from African countries to a tour of the Ricoh Technology Center in Ebina City, Kanagawa Prefecture, as well as a get-together there on Tuesday, March 31, 2015. The students were in Japan on a program under the African Business Education Initiative for Youth (the ABE Initiative).

The ABE Initiative offers 1,000 young African men and women the chance to study at graduate schools and other educational institutions in Japan and work as interns at Japanese companies during the next five years. Japanese Prime Minister Shinzo Abe announced this Initiative at the Fifth Tokyo International Conference on African Development (TICAD V), which was held in June 2013 to support solid and sustainable economic growth in Africa through united public and private efforts. Under this Initiative, the Japan International Cooperation Agency (JICA) is operating and offering the Master’s Degree and Internship Program as part of its project for accepting trainees. JICA plans to accept a total of 900 young people from Africa to the program in four groups through 2017. The program aims to discover and train young Africans who could become business partners for Japanese companies.

In support of this ABE Initiative, Ricoh organized a get-together with 16 students from Kenya, Ethiopia and Tanzania, giving them an introduction to the company, and offering them a tour of the Ricoh Technology Center as part of the Internship Program. The company has also announced its plan to accept trainees for a summer internship (that will last for about two weeks).

In order to contribute to the achievement of a sustainable society in developing countries, Ricoh will apply its own resources (technology, products, services, manpower, etc.), while working to nurture the next generation who will play a role in the future. 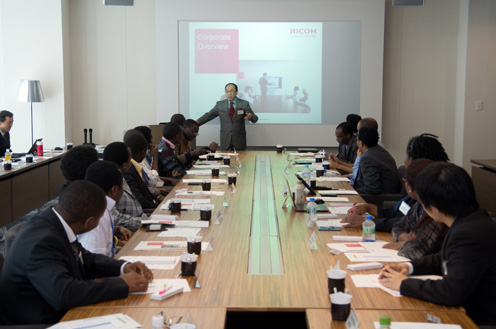 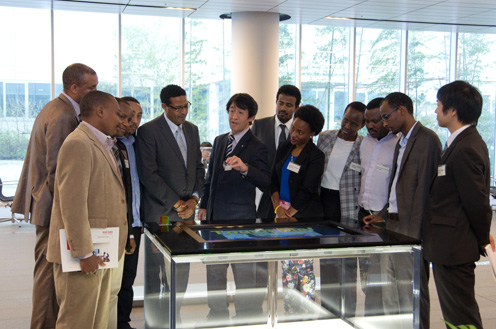 Students from Kenya, Ethiopia and Tanzania, visit the Ricoh Technology Center to study.