The Ricopy brand became well known in the second half of the 1950s, coining the term "Make Ricopy" instead of merely "Make copies." Our product became synonymous with the concept of duplication. And it all started with the "Ricopy 101," which was first released in 1955.

They Ricopy 101 and the desktop diazo-wet copier Ricopy series that followed marked the start of "Ricoh office machines," thereby spawning a revolution to rationalize office work. It was a forerunner of Office Automation (OA). 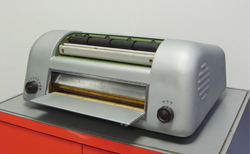 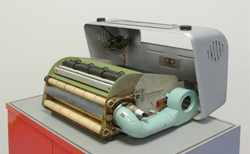 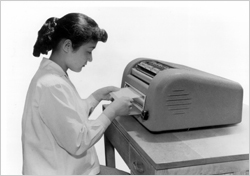 Production line of the day

In those days, the diazo duplication process using ammonia gas was mainstream. Because ammonia gas was used for development after an exposure, the device had to be large and couldn't be used in a room without exhaust facilities. Its main applications were for duplicating blueprints or architectural drawings, so use in an ordinary office was inappropriate. On the other hand, there were conventional (not diazo) cyanotype printing machines for industrial use, but they needed soaking time in the developer after exposure, and required washing in water. Ricoh therefore concentrated on researching a wet-developing method for diazo type paper, which led to the commercialization of the "Ricopy 101" which was odorless, required no washing and was easy to operate beside an office desk.

Ricopy featured a creative mechanism in exposure, developing, paper feed, etc. Ricoh provided a groove on the paper feed roller of the developing device, where attached rings were of a larger diameter than the roller. The rings were designed to pinch and separate the paper so it could be fed through without winding around the roller, preventing wrinkles and curling. Copy speed was five sheets a minute. 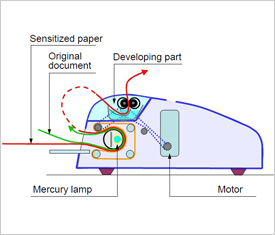 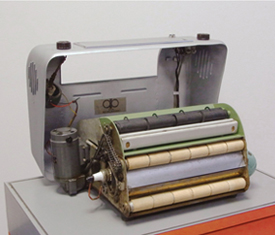 Technological development continued after release of the Ricopy 101 to improve the user-friendliness of office machines. One example was faster start-up. A mercury lamp was used in the beginning to generate approximately 400nm ultraviolet rays as the luminous-source wave lengths for diazo type paper. But it required four to five minutes before lighting stabilized. Power consumption was reduced and life extended by adopting fluorescent light to overcome this problem (1960). Further, the adoption of high-output fluorescent light shortened the waiting time (1967). Ricoh also developed an SD (Super Dry) developer, still in a wet system, to allow the discharge of nearly-dry copies (1975). This differed from the conventional system that dipped sensitized paper in developer fluid. The company also promoted the development of peripheral equipment, with the goal of automating the copying system. Systems were commercialized one after another, featuring an automatic paper feed mechanism for the original document and sensitized paper, and post-processing devices for sorting, creasing, punching, sealing, and binding (1967-1980). Our focused approach on providing user-friendly business machines had begun.

Ricoh’s persistent technology developments made the duplication of office documents and slips easy, doing away with troublesome handwriting duplication. Of course, they also did away with transcription errors which led to the advertising catchphrase “No need to check later.” They raised the curtain on Office Automation. 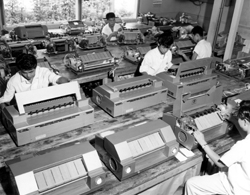 Sales of the Ricopy desktop diazo copier exceeded one-million sets, including succeeding models. These popularized the Ricopy brand, which became synonymous with duplication.

Ricopy 101 is exhibited at the following Ricoh site.