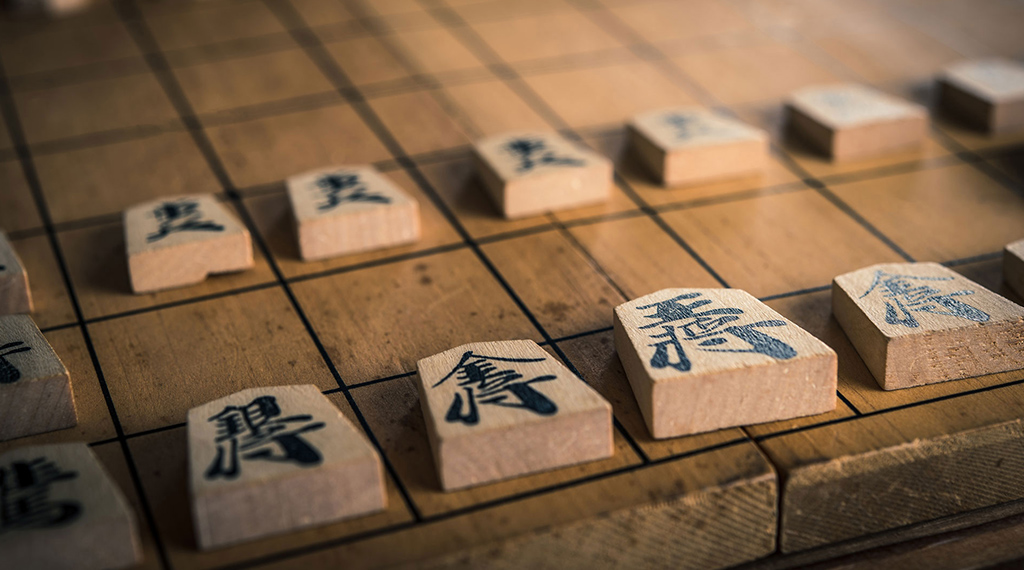 In recent times, the Japanese media has frequently highlighted the triumphs of up-and-coming masters of shogi, or Japanese chess, or stunning new achievements in this game. Shogi has thus become more part of the social fabric here. At the same time, the game is evolving through advances in artificial intelligence (AI) based shogi software and the spread of online streaming.

A new venture has emerged that harnesses AI to automate the recording of shogi scores, an essential element of the game. We spoke with Yoshiharu Habu, a top 9 dan player, about the health of the game. We also talked with Ricoh engineers who created the score recording system with the Japan Shogi Association about the development goals. 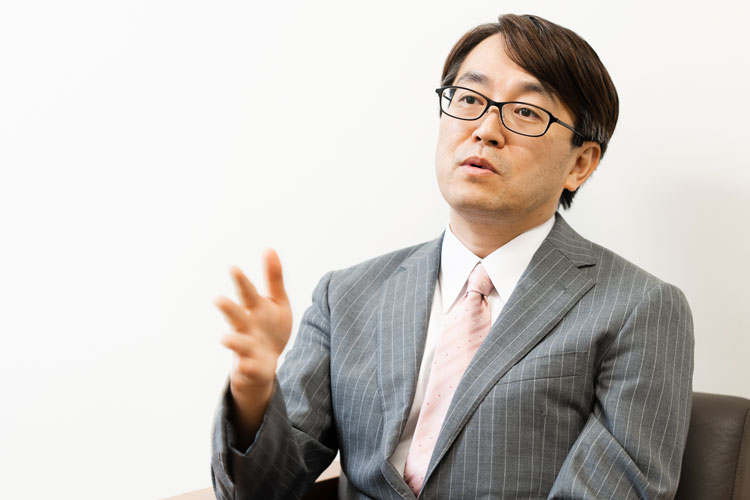 Since becoming the third professional shogi player from junior high school ranks in the history of the game in 1985, Mr. Habu has continued to post new records by winning numerous titles. In December 2017, he became the first ever permanent seven title holder, and received the People’s Honour Award in February 2018. In June 2019, he became the first person to post 1,434 shogi wins.

The evolution of AI-based shogi software is transforming the game. The Ponanza robot memorably triumphed twice in a row against grandmaster Amahiko Sato in 2017. The software has since continued to evolve.

Mr. Habu comments that, “A unique development regime has backgrounded the evolution of shogi software. Major companies have injected big money into chess and Go, an abstract strategy board game. The approach to developing shogi software is more artisanal. By that, I mean individual programmers have made modifications based on open-source software. Software has advanced in leaps and bounds in the past few years, not least because it has leveraged techniques from other board game software.”

It is against that backdrop that Mr. Habu has also changed how he uses the software. Until a few years ago, he employed it just as a calculator to confirm checkmating moves. But he now refers to the software’s assessments of positions in matches that interest him. Shogi software evaluates 10,000 or so factors to determine whether making the first player move or the second one is more advantageous.

Mr. Habu notes that, “I thought I’d be a fool not to take advantage of a computer because its strength is calculations from numerous factors that would overwhelm an individual. That said, I think the figures are probabilistic and are not absolute. In fact, there have been quite a few instances of things ending poorly when taking more than a dozen software-suggested moves. So, it remains for players to decide what to do. 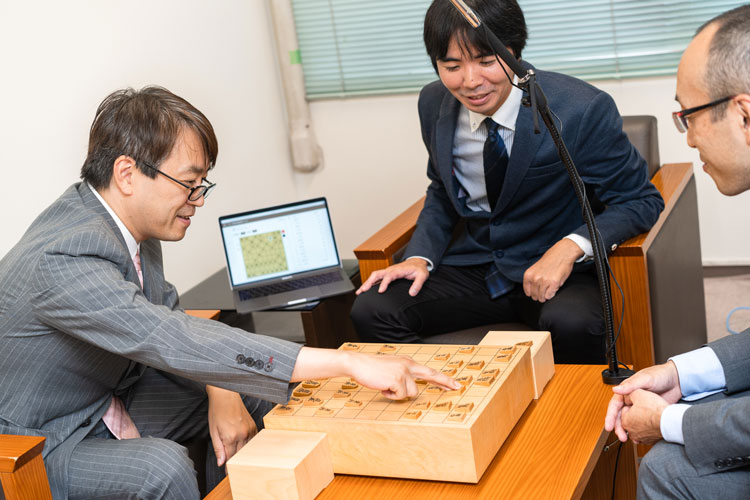 Mr. Habu tried out the AI shogi recording system that Ricoh developed with the Japan Shogi Association. The speed and accuracy of piece recognition impressed him.

People say that while shogi software identifies the best move for each position, people think of a next step after considering time sequences and personal playing styles. But Mr. Habu says that the software has become increasingly humanlike. At the same time, he notes that shogi software techniques have begun to shape player approaches, transforming traditional theories.

Mr. Habu says that, “One day, it will be important for players to learn from AI in tapping their skills. Nobody has established a methodology yet, so the process will take five to 10 years. It will likely be easier for younger players to make that progress. Quite a few youngsters have practiced solely using shogi software. So, individuals who have embraced AI in their daily lives will play a major roles in taking shogi forward.”

Like professional shogi players, the Japan Shogi Association also faces the challenges of change, one being how to record game scores.

The more than 3,000 official shogi games each year require the recording of scores. Scorekeepers handle these tasks manually, and they are largely association apprentices. But in recent years more of them have gone on to further education at high schools and universities. On top of that, the number of official games has risen from 500 annually about 10 years ago amid the game’s growing popularity. The association therefore faces chronic scorekeeper shortages.

Mr. Habu notes that the spread of game livestreaming is a pivotal factor in shortages. He points out that, “In the old days, the best way for apprentices to study shogi was to be at games between professionals. Livestreaming enables people to watch multiple games at the same time from the comfort of home. That is a boon for apprentices wanting to study more and being pressed for time as scorekeepers.”

On current trends, all-important game records would ultimately disappear. It was thus fortuitous that the Ricoh AI Shogi Game Score Capturing System appeared on the scene on June 20, 2019.

What interested Ricoh in creating this AI-based setup? One driver was that Ricoh has been involved in the game for around 60 years, as many fans know. The company set up its Ricoh Shogi Club in 1960. As of this writing, the club had won the Prime Minister’s Cup in the S Class seven straight times in a semiannual team tournament. The Japan Shogi Association runs the tourney among different groups belonging to companies or institutions to determine the strongest players in Japanese corporate circles. Also, Ricoh has sponsored the Ricoh Cup Women’s Oza Tournament since 2011, accumulating considerable expertise in the process. 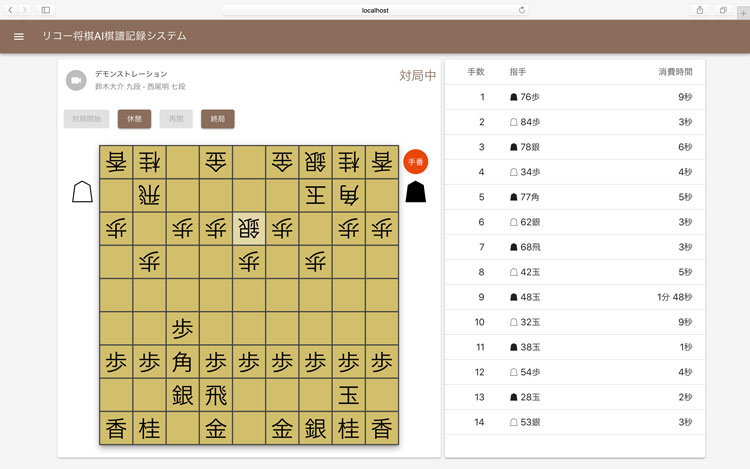 The development of a game scoring system started in June 2018 as a result of personal ties between Masahiro Kisono of Ricoh’s Platform Business Group and Toshiyuki Moriuchi, who was then a director of the Japan Shogi Association. The effort began as a pet project of Mr. Kisono but later became an official initiative of the Japan Shogi Association. Hayato Moue of Ricoh’s Commercial Printing Business Group joined the effort as someone with an excellent knowledge of the game. 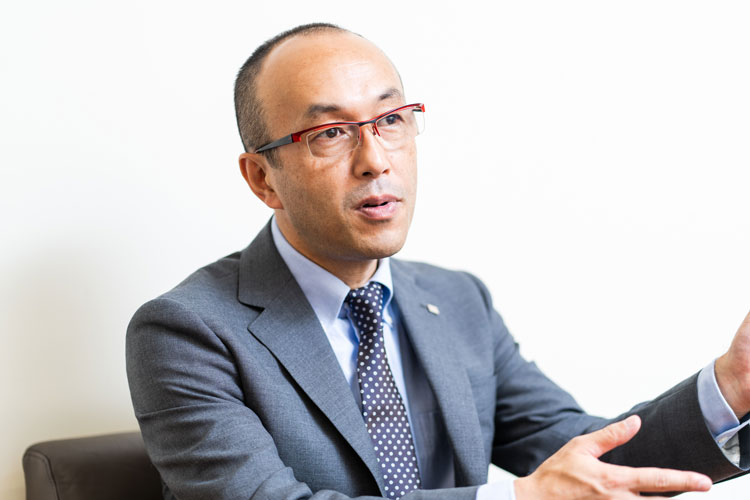 Masahiro Kisono of Ricoh’s Platform Business Group (pictured). The 9 dan Toshiyuki Moriuchi, then a director of the Japan Shogi Association and a backgammon aficionado, learned about a backgammon recording system that Mr. Kisono developed as pet project. Mr. Moriuchi asked Mr. Kisono if it might be possible to create a similar system for shogi, triggering the development of Ricoh’s setup.

Mr. Kisono says that, “I had no technical issues, but since I wasn’t well versed in shogi. I needed knowledgeable individuals to help drive development. Bringing Mr. Moue on board enabled us to verify the system from the perspective of players and streamlined communications with the Japan Shogi Association in deciding specifications.” 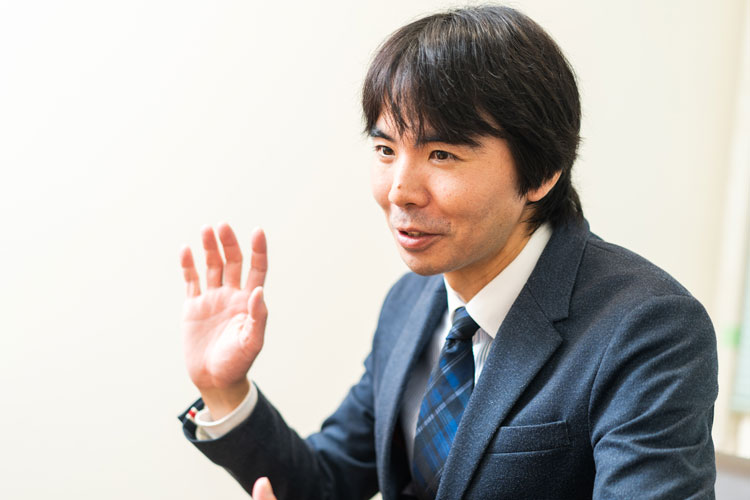 Hayato Moue of Ricoh’s Commercial Printing Business Group was a student shogi champion and a top player in the esteemed Ricoh Shogi Club. He planned the in-house Ricoh Cup Women’s Oza Tournament. He is participating in the development of Ricoh’s system through a side-job program launched in April 2019.

Ricoh’s system generates game scores by leveraging AI to accurately and swiftly capture information from ceiling cameras. The system can also recognize foul moves and four or more repeated moves in the same positions. Ricoh’s system impressed Mr. Habu when he tried it out during an interview for this article.

Another feature of the system is that it can simultaneously handle several games on the cloud through Amazon Web Services. The system works with game broadcast and newspaper observation records, measuring move times, and can also link with the Japan Shogi Association database.

Mr. Kisono says that, “We used deep learning-based image recognition technology to generate game scores by recognizing the positions of pieces. My development team regularly develops mechanical learning and image processing products. All team members, particularly younger ones, were very helpful in developing the system. That is because they constantly share the latest knowledge. The challenge was collecting huge volumes of image data for machine learning. We have collected around 20,000 images of pieces used in official matches.” 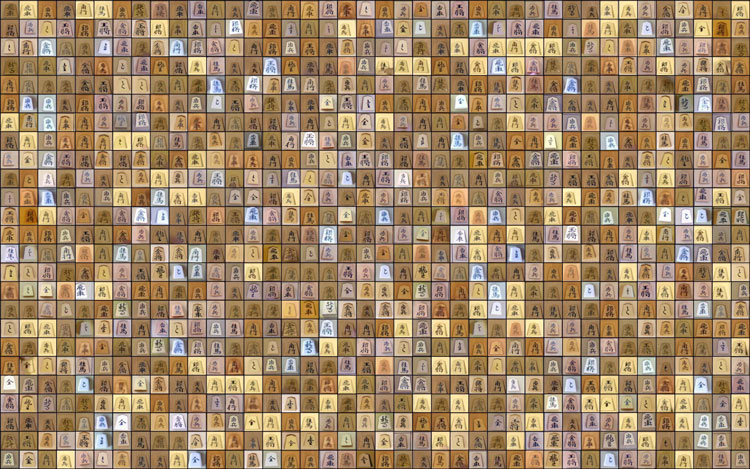 Samples of shogi piece image data collected for machine learning. There are only eight types of piece (14 when including the backs), by diverse character styles AI learning. Another challenge to Ai recognition was wood grains in pieces.

Despite the collection of so much data, image recognition errors are possible. The team accordingly pursued a more innovative solution. As well as checking for recognition mistakes, when the system recognizes that a move violates shogi rules it works to supplement by substituting an image of a piece blocked by a player’s hand or other object with a correct one. There is also an image backup mechanism in the unlikely event of a recording interruption.

Several years ago, Ricoh embarked on its Empowering Digital Workplaces initiative to support partner companies and institutions. The system exemplifies that endeavor. 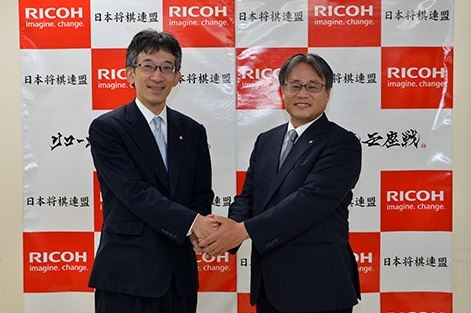 Ricoh’s AI-based system is going through its paces in the Ricoh Cup Women’s Oza Tournament, for which the main games start on July 1, 2019. Mr. Moue expects to encounter unforeseen issues in employing the system in battles between professionals. The tournament is thus a platform to identify operational problems.

Ricoh will leverage trials to prepare for full-fledged operations from April 2020.