From the Valley of the Kings in Egypt to Pompeii in Italy, dedicated teams of archaeologists have saved some of the world’s most important heritage sites from decay. Other sites, however, are deemed too remote, too costly, or simply not famous enough to warrant real-world preservation.

There is hope though. Thanks to digital archiving, future generations will still be able to explore sites like the Taya Cavern in Japan’s Kamakura hills. Deteriorating faster than expected due to climate change and adverse weather in recent years, many of the centuries-old reliefs inside the caverns have weathered and oxidized. With maintenance running to tens of millions of yen, the Taya Cavern Preservation Committee decided to use virtual reality to record the site and raise its public profile. Choosing Ricoh as a partner, they embarked on a project using the RICOH THETA 360-degree camera.

Step inside the Taya Cavern

A brief train journey from downtown Tokyo in a suburb of Yokohama lies the Taya Cavern. Hand carved by Buddhist monks between the 12th and 18th centuries, it’s off the tourist trail and seldom talked about in guides. The entrance to the cavern, located in the hillside of “Taya-san” near the Jousenji Temple (link in Japanese), can be explored below in 360°.

Dug into the hillside and roughly 570 meters (0.35 miles) deep, the cavern has a number of domed “rooms,” one of which can be explored below. On the walls you can clearly see the intricate carvings painstakingly created by Buddhist monks. Refreshingly cold on a hot summer day, the caverns are dimly lit, so tourists who visit are given candles to light their way. Look down and you can see the channels carved in the floor to direct water that seeps through the walls. According to data from the Japan Meteorological Agency, the annual number of showers with an hourly rainfall of 50mm or more has increased roughly 20-fold in the past 10 years, leading to serious erosion on the site.

If you were to visit as a tourist, you would quickly discover that photographs in the cavern are not permitted—one of the reasons this project is so important. Around the edge of the below chamber you can just make out the some of the sacred words, or mantras, carved below pictorial representations, or mandalas, on the walls. Zoom in and you’ll notice both kanji and sanskrit inscriptions.

By capturing historic sites in such detail, Ricoh hopes to raise awareness of cultural icons that are less readily accessible as their more popular counterparts. A spokesperson for the company said, “When the UN’s Sustainable Development Goals were announced in 2015 they raised a number of issues to be addressed by the international community. In response, we are undertaking a range of initiatives to ensure sustainability. As part of the Driving Sustainability for Our Future project we are expanding our business lines from the conventional office to society as a whole.”

Ricoh plans to document a number of heritage sites across Japan in the near future, preserving them for the future generations, and raising awareness of important locations off the tourist trail. 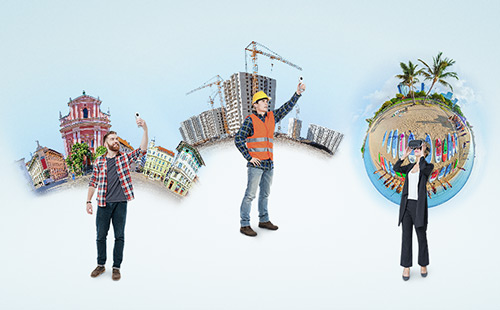 The sharing of space and experience