The Manufacturing of reference DNA plates

PCR* is widely used in genetic testing. Reportedly, a PCR-based method can detect even a single DNA molecule by amplification. The method is widely used in inspections of GMO (genetically modified organism) foods, cancers, and infections. Some severely strict inspections are prohibited from overlooking any of the specific DNA sequences (target genes). Thus, it is important for testing laboratories to implement thorough quality control over the testing equipment, the reagents, and the detection method as a whole.

*
PCR (polymerase chain reaction): A method that enzymologically increases the DNA molecules that have a specific sequence

In the newly developed process for the reference material, cells are genetically modified to have a target sequence inserted in them enabling the number of DNA molecules containing the target sequence to be counted. The genetically modified cells are counted and delivered from a special bioprinting inkjet head to a 96-well plate; this is done so that each well has a prescribed number of cells. In the end, the cell walls are destroyed to extract the DNAs. That way, a reference DNA plate is manufactured with a determined number of DNA molecules in each well. The technology exploits the high-speed droplet delivery of an inkjet head and allows reference materials to be efficiently produced with the number of DNA molecules precisely controlled.

2. Delivering cells from an inkjet head and counting cells in mid-air droplets

Cells are as large as 10 µm and can cause sedimentation and nozzle clogging, so it is not easy to deliver them from a generic inkjet head stably. Ricoh has developed a special bioprinting inkjet head for delivering cells. The head has a simple construction without a fluid channel, yet it can deliver fluids in small amounts of solution. Ricoh has also developed a new technology to irradiate the delivered droplets with a pulse laser beam in sync with the delivery, and thus observe the fluorescence of the cells and count the cells in the droplets. The technology enables the droplets to be stably injected into the wells while the cells are counted; the number of cells can now be strictly controlled. 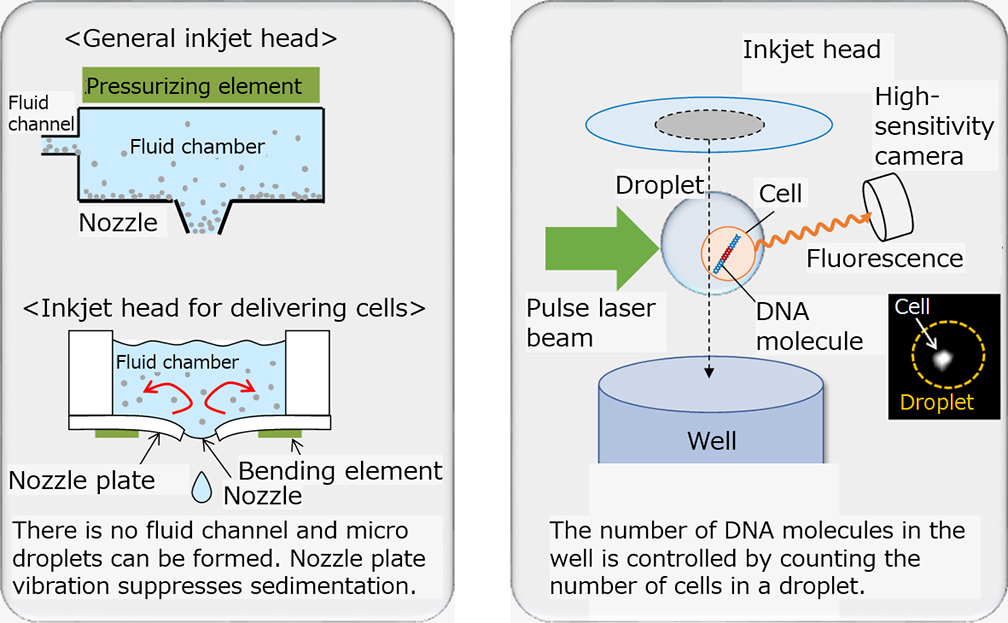 3. Evaluation of the reference DNA plate

A real-time PCR device was used to evaluate the threshold cycle (the output value of the real-time PCR device, indicating how many times of amplification is required for detection) for 1 to 1,000 DNA molecules. Linearity was demonstrated in the region of 100 or fewer DNA molecules, where sufficient analysis was not possible in the past; it was verified that DNA molecules would be correctly detected even when the number was small. We can logically conclude that using the reference DNA plate will enable production of a precision scale for real-time PCR devices. 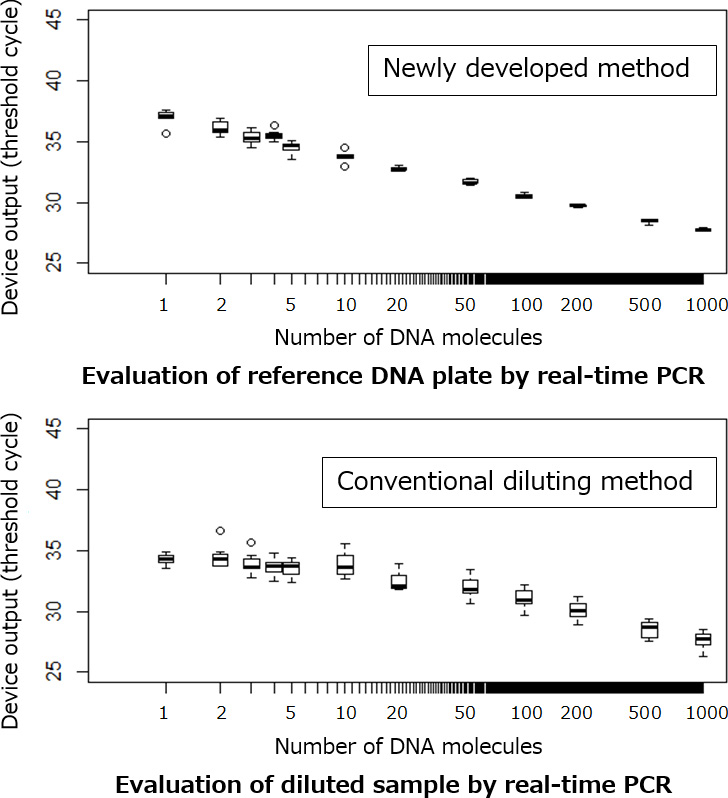 In pursuit of the possibilities of printing technologies, Ricoh is seeking possibilities on new customer platforms. In the biomedical field, Ricoh leverages its bioprinting technology and creates new value jointly with other institutes and enterprises through open innovation. The aim is to contribute to providing solutions to social issues.