A production line comprising multiple carts and powered by air cylinders. An environment-friendly production system that can respond flexibly to production volume and equipment model changes

The Ricoh Group produces imaging equipment such as copiers and printers at production sites in five global regions: Japan, the Americas, Europe, China, and the Asia-Pacific region. In the 1980s, a period of expansion for OA equipment, conveyor lines suited for mass production were installed at production sites, thus achieving high production efficiency through automation. Copiers, however, subsequently acquired many additional functions, including printing, scanning, and network functions, and in response to diversifying customers needs there was a large increase in the variety of copier models, with the industry entering a period of high-mix low-volume production.

In response to this production trend, in 1999, the Ricoh Group began gradually discontinuing fixed conveyor lines and introducing a layout-free production system capable of responding flexibly to production volume and equipment model changes.

In the cart production line, which is an example of this initiative, multiple carts lined up in a row and powered by air cylinders move along the production line carrying products. Because huge, high energy-consuming conveyors are not required, this system has brought considerable reductions in environmental impact and energy costs; enabling a reduction in electricity consumption of 99% compared with conventional conveyor line motors. Moreover, as the layout can be freely changed, the formation can be rearranged on a case-by-case basis to suit equipment models and production volumes. 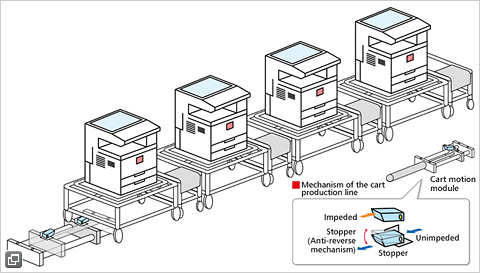 The cart production line has the features as follows;

A small facility that can be moved easily: Cart production line

(2)Energy and space can be saved by eliminating fixed facilities.

In-process inventory, lead time, space, and maintenance are all reduced by 70-80%. In addition, reductions in air-conditioning and lighting costs are also achieved because the system uses less space compared with conventional conveyor lines, which require various peripheral equipment.
This cart production line has been improved to be used as a model for introducing the layout-free production system in other production sites around the world.