This is an innovative optical technology that has enabled ultra-close-range projection from a compact, lightweight projector.

Solving all projector discomforts at once

Portable projectors used to cause much discomfort - they were hot and noisy, and shone on the presenters, dazzling them and casting their shadows on the screen. Installing the projector on the ceiling would solve many of the problems, but the expense would be high. That was where the ultra-short-throw projector came in, but it had its own problems. While its projection distance was short, the ultra-short-throw projector was large and heavy, unsuitable for portable use. Beyond that, cabling was also a problem - though the projector could be placed near the wall, the cables between the projector and PC obstructed the presenter. 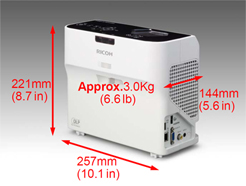 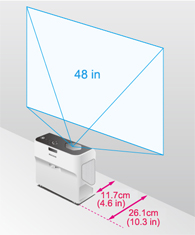 Generally, a projector magnifies an original image formed on a micro display - a display panel of less than one inch diagonally - by nearly 100 times, and projects it onto the screen. To shorten the projection distance while keeping a large projection size, the optical projection system (an assembly of optical components including lenses) needs to support a wide viewing angle. Generally, multiple glass and plastic lenses are combined and large-diameter lenses are used to achieve the target performance. Thus, the wider the viewing angles, the larger the lenses and the more the number of the lenses. The requirements to widen the viewing angles of a projector are inversely proportional to reducing the projector’s size and weight.

Usually, beams are spread by reflection on a convex surface. A convex mirror is placed in the middle of beam paths, so it has to be large enough to receive the spreading beams (see Figure 3 (a)). Using a concave mirror, Ricoh has successfully reduced the size of the optical system (Figure 3 (b)).

With a concave mirror, an intermediate image is formed to suppress the spread of luminous flux from the lenses. The intermediate image is then enlarged and projected at one stretch with the reflective and refractive power of the concave mirror. This technology enables a large image to be projected an ultra-close distance. Our imagination exceeded common sense. The reversal idea - the concave mirror - enabled an ultra-wide viewing angle while keeping the optical system small. 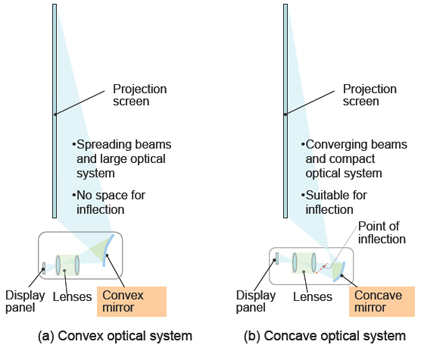 Figure 3: Optical systems based on convex and concave mirrors

There were limitations, however, to the method just using aspherical lenses. As a breakthrough, Ricoh provided the concave mirror with a free-form surface. The newly developed free-form mirror greatly increased the degree of freedom of design, enabling us to meet two contradictory requirements - smaller size and high optical performance. Using Ricoh’s already famous high-precision plastic molding technology, we attacked the limit of processing precision of the optical components. Our efforts led to the birth of the optical system for ultra-close-range projection.

3. An inflected optical system to reduce size based on a unique vertical structure

Further, the vertical body structure contributes to smaller size. This design allows the projector to be brought closer to the screen, enabling a large image (a 48-inch image in the closest range) not possible with a conventional ultra-short-range projector based on curved-surface mirrors. With the very small footprint, the new projector allows the effective use of space.

The designer is an intelligent hub for connecting everything   （Hiroshi Morohoshi, Senior Designer）