Ricoh has developed an original VCSEL Array as one of the key-technologies to realize high definition and high-speed printing.

Conventional commercial printing and mass printing are dominated by offset printers. Digitization, however, has been under way in this field in recent years, with increased demand for variable printing (personalization) and liaising with digital image processing. One result of Ricoh’s proactive response to these needs is a newly developed 40-channel Vertical Cavity Surface Emitting Laser (VCSEL) Array (Figure 1). 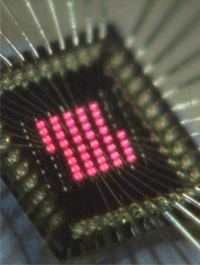 Ricoh’s VCSEL achieved the industry’s highest density (4800dpi), with the ability to emit 40 laser beams simultaneously as a light source for the optical recording device of a production printer or high-speed copier. This achieves high-speed and high-definition printing equal to that of offset printing, resulting in vivid images and crisp and clean characters/narrow lines.

VCSEL is a surface emitting laser diode that features the fabrication of a two-dimensional arrangement of the beam; density of the laser beam can be significantly increased in a smaller space than with the conventional edge type laser diode. No commercialized VCSEL for digital printers and copier machine was before possible, however, because of difficulties in fabricating a high-power VCSEL that satisfied printer specifications.Ricoh has successfully overcome those difficulties by developing this original VCSEL designed with a high-quality vertical cavity. 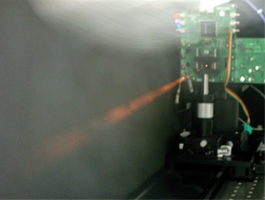 The goals of VCSEL research and development were the industry’s highest pixel definition, its highest printing speed, and its highest-reliability in obtaining stable image quality. To achieve these goals, Ricoh developed the following additional technologies derived from the 40-channel VCSEL.

One feature of Ricoh’s VCSEL is its 40-channel bits arranged in a space of less than 1mm2. An original VCSEL driver was developed to expand the 40 beams to the industry’s highest density pixels on paper. This driver sharply improves response in optical output, and slanted narrow lines and isolated dots excel in image reproducibility. The driver chip is placed beside the VCSEL chip and controls the 40 beams individually by high-speed modulation.

To gain high printing speed, a high power writing unit with high quality optical beams was required. In developing the VCSEL, to satisfy this requirement, Ricoh developed an original active layer and optical filter layer for the 40-channel VCSEL. An active layer with high efficiency and improved thermal conductivity was realized using a new material with low thermal resistance. And high optical quality was achieved using an original new filter, which suppresses higher modes. As a result, Ricoh’s VCSEL leads the industry with the highest output power with high quality optical beams.

With these solutions, Ricoh has made it possible to form images at higher speed and quality than ever.

Practical use of VCSEL

Furthermore, Ricoh has developed a “High-Power VCSEL Module” by increasing the luminescence efficiency of the VCSEL elements. It has also achieved large-scale integration of the light-emitting channels and together they significantly boost the output power of the laser array. The High-Power VCSEL Module incorporates three technological advances, namely high output performance, compact size and wavelength stability in variable temperatures. Ricoh is also looking to expand into applications such as laser processing machines, surface treatment processing such as laser patterning, non-thermal processing and sensing, as well as the development of other applications.

Growing seeds for the future, sometimes in the dark