Ricoh has developed technology for a new kind of color reflective display that employs the same principles as a color copier. The result is significantly brighter, lightweight displays while maintaining low power consumption.

The principal feature of reflective displays is that, like paper, they can display images without the need for a light source. Because there is no need for electricity to emit light, power consumption is very low compared with conventional LCDs (liquid crystal displays). Even better, there is low eye strain. This technology has become popular as a key technology for electronic paper.

Ricoh has fabricated a reflective display element with a new structure that reduces light loss to reproduce color by superimposing the three primary colors of Cyan, Magenta and Yellow, as is done in printing color on paper. The technology adopts an original simple lamination structure, forming three electrochromic layers between two substrates, where new electrochromic compounds are used as the chromogenic layer, which generates the three primary colors vividly from a transparent discolored status. It does so with a low voltage comparable to a dry cell; the chromogenic status is retained even if the power is switched off. This bright display matches that of paper; this was theoretically impossible with the conventional color reflective display.

Table 1: Comparison of Ricoh's new display and other display medium
(*1) Reflectivity and contrast ratio were evaluated at 555nm wavelength.
555nm wavelength is most strongly sensed by the human eyes.
(*2) Color gamuts were evaluated by CMYRGB areas of CIE a*b* plot. (Incident angle was 30 degree)
The art paper (Japan color) was used as a reference.

Without their own light source, achieving high brightness in the development of color reflective displays has been a major challenge. This has been difficult because light efficiency is too low when using a Red/Green/Blue color filter such as that used in the conventional LCD structure (Figure 1). The typical color reflective display, therefore, now comprises three layers that generate red, green and blue light, each separated by a sheet of substrate with transparent electrode (Figure 2 (a)). The new reflective display is fabricated by superimposing alternate layers of transparent electrodes with YMC colors separated by insulating layers (figure 2 (b)). As a result, the number of electrodes is halved and the number of substrates is one-third what it used to be. With fewer elements, the display is thinner, lighter and less costly than existing devices; the reduced light loss results in a brighter appearance. In addition, light weight, flexible plastic substrates can be used because the process temperature is sufficiently low (around 120 degrees Celsius at the maximum).

Because the newly developed electrochromic compound efficiently uses light and does not depend on the viewing angle, Ricoh’s display (prototype) can deliver about 4 times the color reproducibility compared with a commercially available color reflective display. Accordingly, it is possible to obtain a color indication at a level near that of a commercially available mobile PC (LCD) in an ordinary office environment (brightness 1500lux). 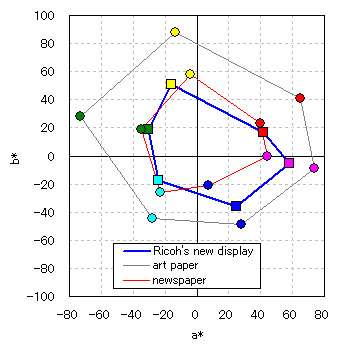 Because Ricoh's display element has a display part formed by functional films thinly layered on a transparent base plate, it also features a significantly thin element. The spacing between each display layer of Cyan, Magenta and Yellow is narrow (in 2 micrometer level), so an ideal color mixture is achieved, while a detailed pixel pattern is displayed faithfully. 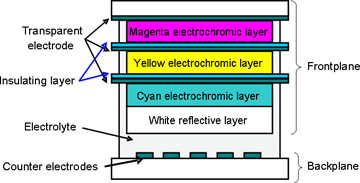 The color image is displayed by generating color on each display layer, switching the electrodes of Magenta, Yellow and Cyan. 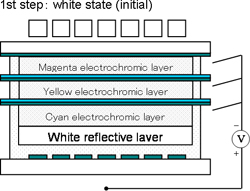 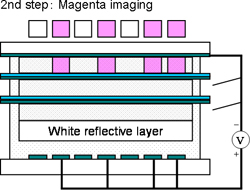 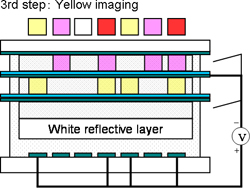 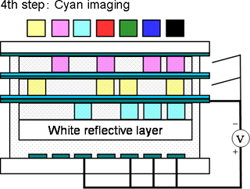 
(b) The principle experiment of color display

*These electrochromic compounds are co-developed with Yamada Chemical Co., Ltd.