Electrophotographic devices such as copiers and printers use developer powder to form images. The powder consists of resin toner with a diameter of 5 to 6 microns and ferrite carrier with a diameter of 30 to 50 microns. Whereas the toner forms images directly on paper, the carrier transports the toner in the machine. Developer powder is continuously circulated and mixed by rotating screws or paddles. In the development process, toner is consumed to form images. Control of the powder flow is important for stabilizing image quality. Instability of the powder flow causes problems such as image bleeding and toner scattering.

Figure 1 shows developer powder flow in a channel observed using visible ray. The shape of the rotating screw is scarcely visible and the detailed flow cannot be observed. 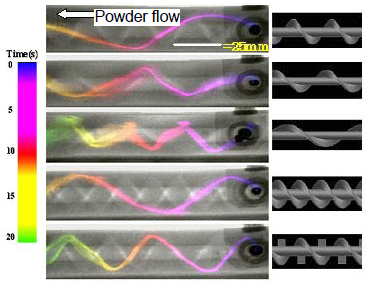 Figure 2: Structures of flows of developer powder transported by screws of various types visualized with X-ray

Figure 2 shows flows of developer powder transported by screws of various types. The flows are visualized by path lines in color. The color indicates the length of time. The flow characteristics are easily grasped from the images. Computer image processing analysis of tracer behavior can quantitatively measure flow velocity and the magnitude of mixing.

Since the fluid dynamics equation (the Navier-Stokes equation) cannot precisely represent the powder flow because of its complexity, the definite element method (DEM) is used to predict the flow. The method calculates the movements of all the particles composing the powder. Although the method can exhibit the flow precisely, the calculation time is long because the powder is composed of a huge number of particles. 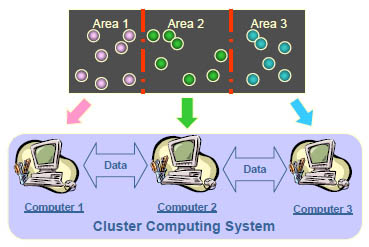 To solve this problem, we have developed a cluster computing system in which all the computers are interconnected by a high-speed LAN. For the system, we have developed a program involving division of the powder flow into areas, assignment of each area to a computer, and distribution of the computation load (Figure 3). The method dramatically reduces calculation time.

Figure 4 shows three-dimensional behavior of the developer powder, namely, the magnetic brush phenomenon, calculated by DEM with the system.

In a development process, an elastic blade is pressed hard against the developer powder in a narrow channel to electrically charge the toner. Figure 5 shows computer simulation results of the process. The color of the powder indicates the initial particle location. Transportation and mixing of the powder around the blade are presented clearly. 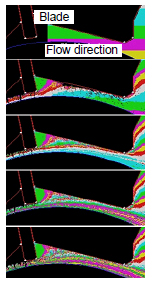 Figure 5: Computer simulation results of developer powder passing around the blade in a narrow channel

The simulation method is useful in designing the development process. Beyond that, the visualization technique is needed not only for observation but also for validation to improve accuracy of the simulation. It is necessary to enhance these technologies simultaneously.

The X-ray visualization we have developed provides precise information on what happens inside the developer powder flow. Using the technique, we have made new discoveries concerning the powder flow. Information on the great variation in powder flow structure depending on the screw configuration is particularly useful. A research paper on the discoveries received an annual congress award of the Visualization Society of Japan in 2008.

In accordance with its"Create without Making" policy, Ricoh has been promoting rapid large-scale reform of the product development process and other processes. The visualization technology described here shows how Ricoh's emphasis on computer simulation is a source of decisive advantages.

The visualization technology plays a vital role in clarifying the physical mechanism in an important process. By employing this technology, we are enhancing product value.
Return to previous page
Sorted by : field "Fundamental Technologies" | product type "Multifunction Products" "Production Printers"