Venturing beyond my comfort zone

At college, I majored in inorganic materials, particularly phase change materials. As I intended to work for a company in or near my hometown, I chose a Ricoh group company in Miyagi. I did not insist on my academic specialty, so I felt no resistance when I was offered a position in research and development of compound semiconductor devices. I accepted it, thinking it was a good opportunity to widen the scope of technology I could deal with. It was then that I first encountered metal organic chemical vapor deposition (MOCVD). I have been consistently delving into that area ever since.

Luckily enough, I joined the company when Ricoh had just started research and development of compound semiconductors for the coming information society. For the first three years, we studied coaxial transverse junction (CTJ) surface emitting devices in an industry-academia joint effort. Our focus was on expanding the range of the technologies of the laboratory. The effort was later used in the development of vertical cavity surface emitting laser (VCSEL*1). During that time, the laboratory kept strengthening its foundation, by sending people to college laboratories for study and inviting people from academe. 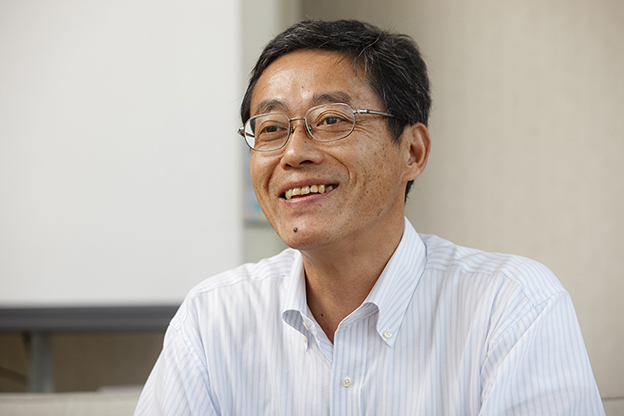 From the beginning, the laboratory intended to contribute to the entire company, partly because it was established under the policy "From Device Material to System Development." After the CTJ research had completed the first stage, we developed an LED array for printers and suggested that the related department implement it in their products. To our regret, it was not accepted. It was, however, a good opportunity for me to polish my MOCVD technology. No work that can be wasted.

In 1995, an important announcement was made that changed my life as a researcher. A domestic electric appliance maker presented GaInNAs*2, a new material with a potential for application to the long wavelength semiconductor laser. The material efficiently confines electrons in a quantum well and operates at high speed without special cooling. Not needing any special cooling means low cost. I felt the possibility of introducing optical fibers to homes, and jumped to the technology. "This is great if it’s brought to the real world."

The challenge was in the need to use molecular beam epitaxy (MBE) for epitaxial growth. MBE is suitable for, say, special materials like GaInNAs, but requires sizable hardware and is not suitable for mass production. However, as I read through the documents, I have confidence that MOCVD would work.

*1 VCSEL: Vertical Cavity Surface Emitting LASER. Emission and oscillation are vertical to the substrate. Compared to the conventional semiconductor laser whose emission and oscillation are horizontal (end-face emitting laser), VCSEL has the following advantages: (1) It is easy to make the emitting point two-dimensional, which allows multiple beams. (2) VCSEL operates at low power consumption. (3) The emission area has a small volume, which allows fast modulation. (4) The initial probe test can be performed before separating devices into discrete chips, so a production cost can be lowered. These are just examples. VCSEL applications are expanding from light sources and connectors for optical communications to optical disc writers and laser printers. VCSEL was invented by Kenichi Iga, former president of Tokyo Institute of Technology.

*2 New material GaInNAs: III-V alloy semiconductor of gallium, indium, nitrogen, and arsenic. In the past, it was considered difficult to induce its crystal growth due to a low miscibility. However, it was found that adding N increases the carrier confinement effect in the quantum well, and attention has been paid to GaInNAs as a promising material for the active layer of semiconductor lasers ever since.

Going to the possible rather than status quo

Let me give the conclusion first - for the first time in the world, we successfully made a membrane using MOCVD. Even better, we did it more quickly than we first estimated. Our first prototype successfully achieved room temperature pulse oscillation at wavelengths up to 1.29 µm. After the successful formation of the membrane, I had opportunities to present my work at The Japan Society of Applied Physics Academies and International Academies on Semiconductor Lasers. At every occasion, I was asked the same question - “What made you think MOCVD would work?" I wondered, "What makes them think it wouldn't work?" (laughter) It's true, GaInNAs is not easy to handle, but that doesn't mean it's impossible.

It is difficult to put into words - the key is intuition, or sensibility, I think. The world of membrane-making is a black box in the first place. It is virtually impossible to see what's going on in the membrane-making chamber or express it in mathematical formulas. The cause-and-effect relationship between the conditions and the results is not necessarily linear, and it is not easy to develop hypotheses. This is the field where I have to depend on my intuition to develop hypotheses. Even at Ricoh, when I first said I wanted to choose it as a research theme, people teased me, saying: "the probability would be lower than winning the lottery." (laughter)

Yet I was able to develop a GaInNAs semiconductor laser based on MOCVD within a year. I started out thinking it would take three years. However, the black-box world worked out fort the good this time - all conditions came together in a perfect match. Reviewing the process now, I wonder if I would have been able to finish the job in such a short period if I had made many surveys before starting development. I believe that repeating trial-and-error processes in the clean room yields results more quickly than making surveys on the desktop. Sure, long years of experience and achievements count in the world of research. Yet that is not everything in the field of MOCVD. And that's why I’m attracted to it. 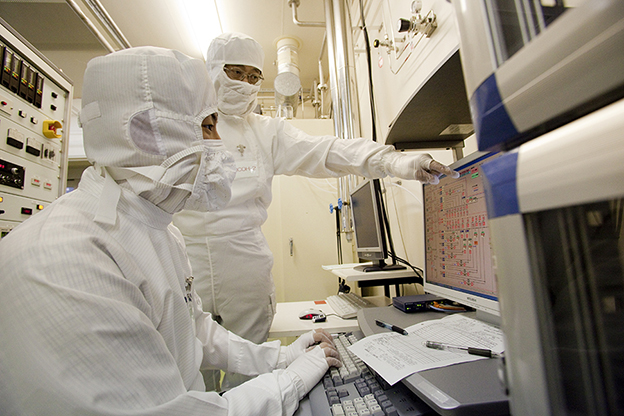 "Now that the semiconductor laser has been developed, how can it be used at the company?" As I was contemplating this, I was offered a joint development project from the researchers at the Precision Engineering Laboratory of the Tokyo Institute of Technology, the head temple of VCSEL. That was 1996. Yet the situation did not allow me a quick start - I was swamped with other tasks for about four years. During that period, I was granted research "under the desk." The laboratory allows its people to address individual themes in addition to official tasks.

It was the year 2000 before I finally got to focus my efforts on VCSEL development. In only five months, we made a VCSEL device in a long-wavelength band of 1.3 µm with an active layer of GaInNAs. The effort was introduced in the Nikkei Newspaper (October 7, 2000) under the headline of "Ricoh Succeeds in Continuous Operation at Room Temperature." The short-term development owes much to the quality lamination of the distributed Bragg reflector (DBR) of Tokyo Institute of Technology as well as performance improvements that had been conducted under the desk.

With this achievement in the background, we started to develop VCSEL devices usable in Ricoh's products. The target was the laser printer, and the wavelength was 780 µm. The new device would enable eight-time resolution and ultrahigh-speed scanning. However, the relevant department responded to our presentation with a "No" - they did not need it for the time being. The rejection resulted because the review was conducted under a condition where VCSEL performance could not be demonstrated adequately. It was unfortunate.

Immediate application to Ricoh products was denied, but we continued developing VCSEL as we were confident of its usefulness. Did I tell you? Ricoh's corporate culture allows us a certain flexibility. By taking advantage of it - don't take it the wrong way - we were able to accumulate considerable expertise regarding the long-wavelength band VCSEL. I am proud that we had top-notch technological skills in this area at that time.

It was 2003 when the situation completely changed. A competitor company released a laser printer with VCSEL. We were suddenly summoned and ordered to start taking measures to immediately implement VCSEL (laughter). Although we had a late start, we were able to develop a high-pixel-density, high-power VCSEL array*3 - we beat the competition with a greater number of beams and power. Although it took some time to overcome issues unique to printers, such as the need to improve thermal radiation properties, the company decided to use it on the RICOH Pro C751EX/C651EX production printers (released June, 2011). I was delighted. But soon after we started full-scale mass production, the big earthquake hit east Japan.

Ricoh's 40-channel VCSEL whose chip size is less than 1mm2 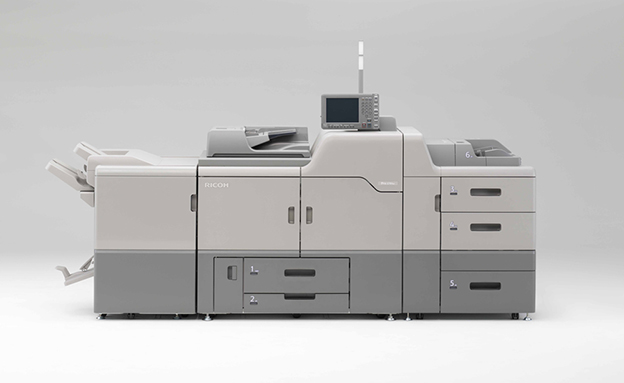 On March 11, I took a day off to attend the graduation ceremony of my junior-high child. It took ten days to get back to the company. I returned only to find a severely damaged internal infrastructure. Restarting production was simply out of the question. Nevertheless, all of us strove to restore the production facilities, hoping to have the product released as scheduled. In about four weeks, our rebuilding efforts made partial production possible. It was July or so when we achieved 100% recovery. Through the months between, all of us were united, trying to save the workplace, the job, and, more than anything else, what we promised the customers.

I encountered MOCVD, gained knowledge with CTJ, learned system designs with LEDA for printers, gained confidence with the GaInNAs semiconductor laser, and became able to contribute to the company with the VCSEL array - the process took about 25 years. My value, and the value of the laboratory, will be questioned from now on, I believe. As a rare entity with expertise in VCSEL, we are developing a system that will astonish the world. We do not merely intend to replace the end-emitting laser; our real aim is innovation of the infrastructure of the computerized society based on a system where VCSEL is fully utilized. Of course, in addition to VCSEL, development is under way for a variety of compound semiconductors to protect the environment and to increase safety and security. Here, we have as many themes as we have researchers. Most important is the attitude to continue the challenge - spirited, and never giving up!

What is important is pride and confidence in the job

I am delighted that VCSEL production started this year. How did Tohoku R&D Center make it happen? I thought about it for a while, and came up with an answer: “We are proud and confident in our job and try to work hard until we get results.” Mr. Sato epitomizes that answer. He is a talented powerful researcher.

That does not mean we work to gain results over a long period, as in “Constant dripping wears away a stone.” Even in a short-term activity, we deliver tangible results in ways people can see.

After the Great East Japan Earthquake and Tsunami on March 11, we restored the production line fast enough to deliver the Ricoh Pro C751EX/C651EX at the originally announced release date. Delivering results has become a part of our culture, and it is reassuring.

By maximizing this advantage, I believe we can continue to produce more and more helpful technologies for society, as tangible objects like devices and modular products. One of the next targets is the energy field, which is attracting a great deal of popular interest these days. We want to develop devices that spawn innovation in the energy field. 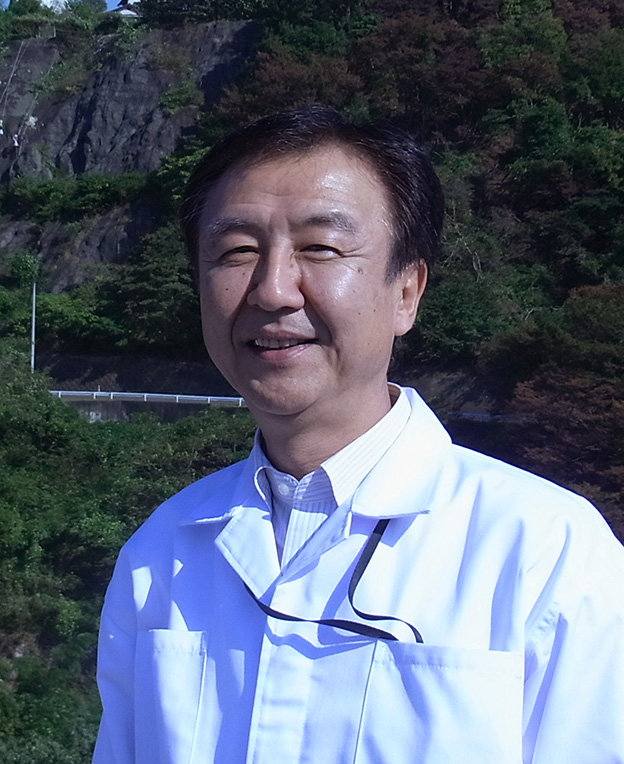 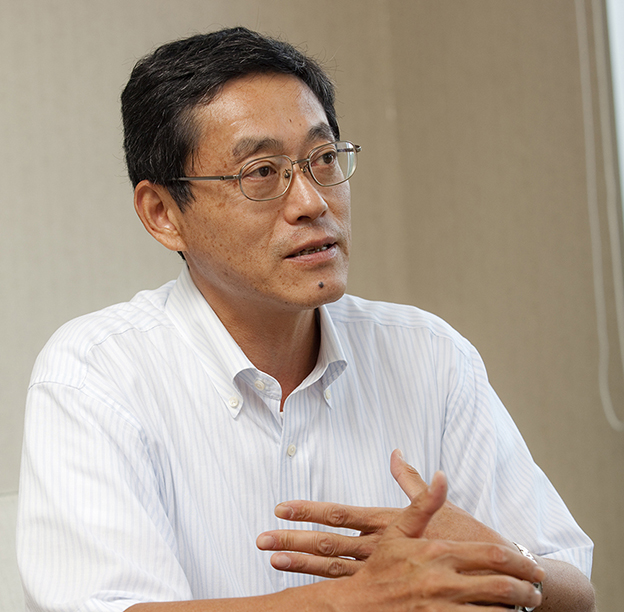 Graduated from Electronics Course, Faculty of Engineering.
Since joining Ricoh in 1986, Satoh has been engaged in research and development of compound semiconductor devices. In 1996, he succeeded in making a GaInNAs semiconductor laser using the MOCVD method for the first time in the world, and developed a long-wavelength-band VCSEL in 2000 to be the leading person in this field in a private company. As a student, he belonged to an alpine club and went climbing 300 days in four years. After marriage, he transformed from an alpinist to a home gardener.