Branding via the design
of a new business

Livestock farming: A step into the unknown for Ricoh

Ricoh is a company that engages in R&D encompassing a wide variety of advanced technologies. Examples include image processing technology developed for cameras and multifunction products and sensing technology that converts sensor-generated information into numerical measurements of the subject object. Putting the resulting technologies to good use, Ricoh also actively creates new business in fields where it has not previously been a player.

One example of this is the RICOH CowTalk cow herd management system that has been under development since 2018. It is an IoT service for livestock farmers raising milk cows and beef cattle. The cloud AI system analyzes livestock acceleration data acquired from a sensor attached to a collar. Using basic activity information classified based on the analysis results, breeding cycle and health condition changes are detected, with the resulting information being useful in reducing operating losses. Labor-intensive and time-consuming farm management tasks are made more efficient by transmitting the information to the farmer’s smartphone and displaying it there. The ability to manage 5,000 head of cattle with just 15 people will help relieve farm labor shortages.

I joined this new-business team in April 2018. About to enter my fifth year at Ricoh, I had worked on multifunction product UI/UX up to that point. I had recently told my supervisor that “In order to improve my skills, I would like to get involved in highly innovative product development.” The resulting suggestion of “In that case, how about this new challenge?” encouraged me to make the move. It is very important for people to continuously emphasize what they want to do. 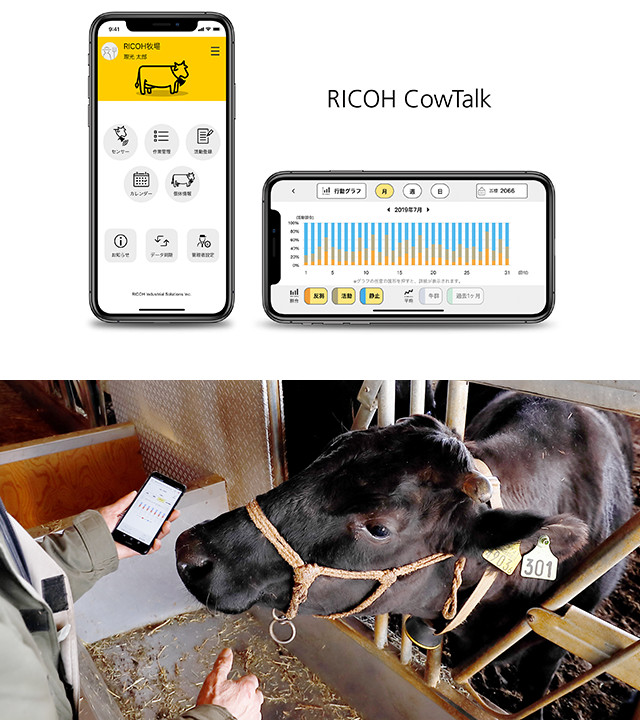 Brand design for the service as a whole

The RICOH CowTalk team is made up of members from both inside and outside the company. RICOH Industrial Solutions (RINS) handles the sensor development and business promotion, a partner company provides the overall project direction, another partner company does smartphone and Web app graphic design and implementation, and from the RICOH Design Center there are two members, one who works on sensor product design and one (myself) who handles app UI/UX.

About six months into the project, meetings bringing together participating companies were being held on a daily basis. In parallel, RINS sales personnel interviewed livestock farmers across the country to identify the actual circumstances and needs of the farms themselves. With that activity still in progress, it was decided that test marketing of the beta version and use by actual users would begin in August 2018. There were about four months left to get ready, and the feeling among team members was that we should get started on the actual application design work right away in order to prepare for the test marketing.

It seemed to me, however, that there was a task that needed to be done before doing the design. That task was to clarify the service concept. What was Ricoh trying to accomplish in getting involved in this business? What kinds of users did we want to approach? The members who had been participating in the project since before I joined had proceeded with their work, but looking at things objectively, I felt that everyone was not in sync. Continuing on as is, the project could suffer setbacks later so I thought that I needed to take on the role of developing a unified sense of purpose among all members.

I immediately set out to do this. Since there was no time to go out to the actual farms, I read the voluminous reports of the RINS sales personnel and clarified what it was that the service was actually supposed to solve. This led to the specification of the concept color as yellow to give the impression of attentiveness and decisiveness and to symbolically represent the service as a ray of light shining to “break through feelings of being isolated and trapped that livestock farmers experience on a daily basis.” The color was also chosen to not only give a feeling of “advancedness” for bringing change to the livestock farm, but also to give a sense of “warmth” and thus promote acceptance among livestock farmers who might not be familiar with IT. This branding clarified the project and design direction and helped smooth later tasks to a remarkable extent.

In the branding design, major hints were provided by the advice that I received from senior team members, who had worked on branding in the startup of the THETA brand. The project environment enabled me to absorb such knowledge, thus providing fertile ground for my own personal growth.

Internal and external collaboration to create a new app

In April and May 2018, I prepared the UI design guidelines. In my previous assignment, I had already worked on UI guidelines for multifunction products. In that instance, guidelines were particularly important to standardize rules since the design staff alone numbered over 10 and the products are sold globally. The fact that partner companies are taking part in the design and implementation meant that design guidelines were also considered important for this app development project.

The RICOH CowTalk smartphone app has more than 100 screens. I handled the final check, but from the perspective of expediting project progress, it would not be a good idea for me to be depended upon for judgements on every little detail of all the production processes. So to enable the people doing the app production to do their work correctly and without confusion, it was necessary to specify in advance the standards to be followed for things like layouts, fonts, colors, and screen activity. It is true that guideline preparation took a lot of time, but the speed of subsequent steps was accelerated. As the saying goes, “The more haste, the less speed.” I had an overseas business trip for another project in June, but thanks to the design guide, development work proceeded smoothly even when I was at a remote site. 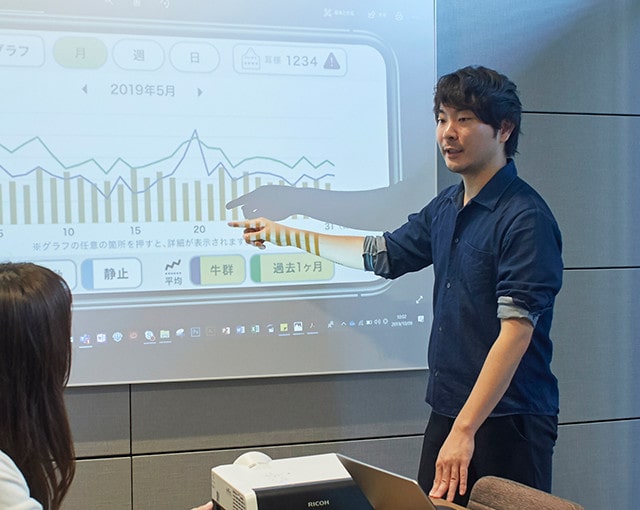 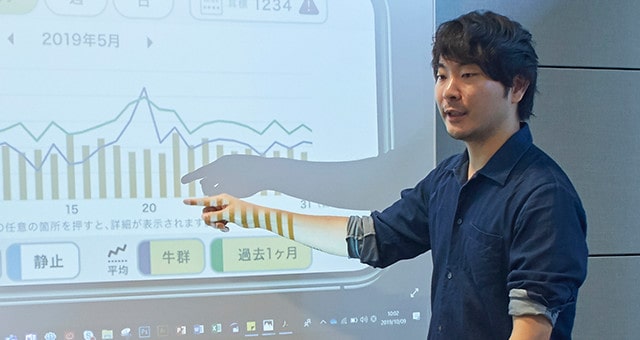 It seemed that my “hands-on” work had increased

To some people, it may seem that my work up to now has not been the work of a “designer,” but the work of someone like a “design director.” For a new business, there are no guarantees of success. For that reason, especially, I think that it no good for designers to limit themselves to just “making a cool app.” Rather, they need to adopt an approach in which they think about what they personally can do to make the project a success, and then take action. For me, “design” includes both thinking about the direction the team should take and preparing rules for doing the work.

Just prior to developing the app, I paid a visit to livestock farmers in Hokkaido. I was able to actually do some of the farm work, ask the farmers for their candid opinions, and obtain feedback for creating app menu displays that are “as easy as possible to understand and use.”

As part of the development, I prepared and implemented interview guidelines for use by RINS sales personnel when they met with livestock farmers in each region to ask those farmers about what they would like to see in the app. I also took part in some of the work done investigating visual material such as product promotion videos released on YouTube. At the same time, the number of things I actually design myself has increased rapidly, for example, Web banner ads, whitepapers made available for download on request, exhibition posters, and, recently, magazine ads. In all these cases, it was my first time doing such work. This kind of expansion of unanticipated tasks is another interesting aspect of new business, and I feel lucky to be the designer. 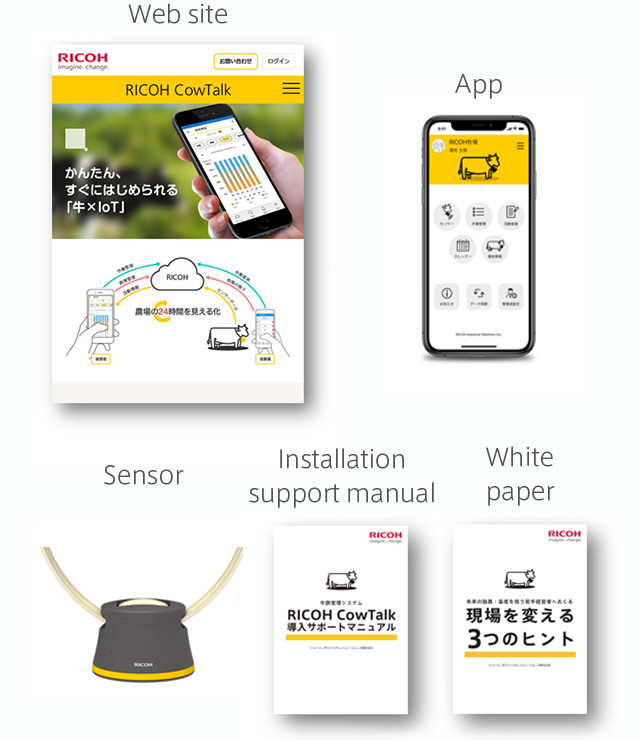 The possibilities of design

RICOH CowTalk won a fiscal 2019 Good Design Award. It was highly evaluated as a design that accommodates people who are not particularly familiar with or fond of IT. While a variety of IT services are being tried, it is design that will spur the spread of superior Ricoh products and services in the new-for-us field of livestock farming. If our actions can energize the industry itself, it could spur the entry of new livestock farmers. Through this project, I have rediscovered possibilities inherent in the power of design.

For this service, the crucial period is just ahead. Concerning the project concept of “breaking through livestock farmers’ feelings of being isolated and trapped,” from among the people doing the test marketing, positive signs are gradually beginning to be seen. The development of a hypothetical scenario through user model and concept creation, the making of decisions on one’s own initiative, and the use of branding to give the service form: The fact that I have been able to contribute to the project in these ways as a designer has contributed greatly to my confidence. 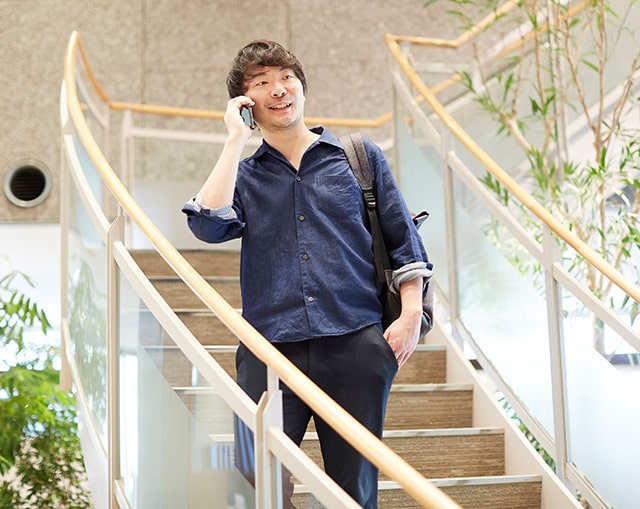 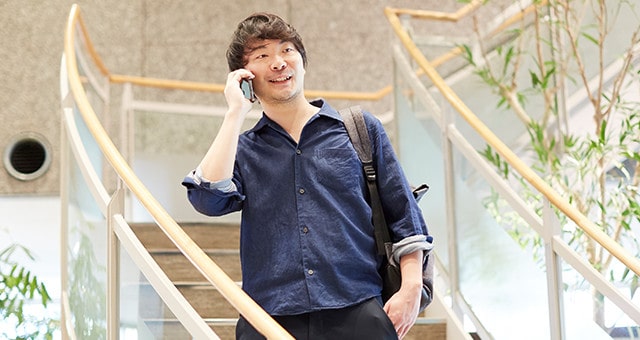 One day of Ryotaro Fujiyama

16:30
Arrangements for planned next user visit