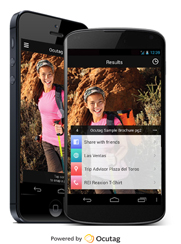 Kanae Nomura was assigned to Ricoh Innovation Corporation (RIC) from 2010 to 2013. RIC is Ricoh’s research institute in California’s Silicon Valley. While she was there, she was in charge of interactive design for Ocutag Snap. It’s an app that connects newspapers, magazines, books and comics in the physical world to related content in the digital world such as video, audio, gaming experiences, e-commerce links and websites. It is currently available in India.
Nomura strived to meet users’ needs for “instant access to content they want to view.” By working with local researchers and engineers in India, she was able to clearly understand India’s unique needs and design tastes. She was then able to use this information to create numerous illustrations that met these needs and tastes. By uniting the technology developed at RIC with the local needs in India, she was able to design something that users can comfortably use. 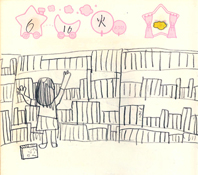 Nomura’s ability to “organize information, explore ideas, and make observations” helps her to focus on “people”. It’s a quality that she developed as a child.
“I’ve enjoyed drawing ever since I was a child. Each week, I would fill a sketchbook with a theme I was interested in. For example, one week I would draw mazes, the next week it would be stores, then it would be princesses, etc. I always looked forward to the weekends when I would receive a new sketchbook.”
Her childhood experiences and time at RIC have helped her to further develop her ability to “organize information, explore ideas, and make observations”. 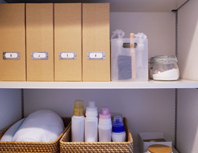 She hopes that her designs will help people feel the sensation of “staying in the comfort of an immaculate hotel”.
Her main focus of design is “people”. For example, her favorite combination in furniture design is white and wood grain. “It’s because I like the comfortable feeling that comes from adding the purity of white to wood grain.” Her hobby is “Cleaning! I like to organize my apartment by thinking about where to keep things so that I can easily find everything.”
Nomura’s subtle considerations are linked to comfortable design. 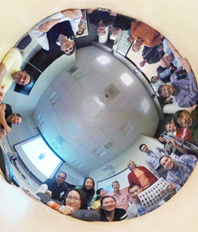 She was influenced by the nature and aesthetics that she saw overseas while traveling as a student. She later had foreign business trips and hoped to work overseas someday. Ten years after joining Ricoh, she was finally given the opportunity to work at RIC. During her time there, she took the initiative to learn about differences in work styles and work environments. In the US, each employee has his or her specialty with lots of responsibility, and tasks are finished quickly. Also, since California is quite culturally diverse even within the US, each person’s cultural background is different and no one understands things implicitly.
“When you propose something in Japan, everyone can read between the lines. However, at RIC it is important to explain the “reason” behind a proposal in a way that everyone can understand.” She thinks this way of thinking is important. “If people find the reason convincing, then they can accept that it is better than something that they had previously thought was best.” She always pursues a “reason” that communicates the essence of things without any assumptions. On the other hand, her stay in the US has helped her reaffirm the delicacy found in Japanese design.
Nomura’s goal of “comfortable design being like an immaculate hotel” results from her pursuit of detailed “reasons” that are carefully considered.