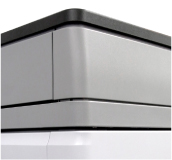 Mr Takeda has revolutionized the design of the MFP. The design concept is a "Knowledge Creation Support Machine". This new concept has been created after we investigated the worlds leading office environments and gathered opinions from office planners. Accordingly, we have confirmed that this design concept can be accepted during the verification stage. The gradation of white, grey, and black was thoughtfully used to match intellectual environments. We provided this machine with simple shapes that fit naturally in an office environment. As a machine that supports office workers' knowledge creation, we aimed to create an intellectual machine whose design blends in, yet still retains a distinct presence in an office environment. 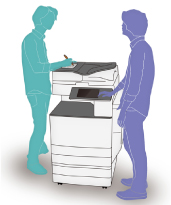 Takeda's vision was that of a space like a cafeteria at which people could gather and casually communicate. "People gather around an MFP, whether to collect copies or simply when passing by. In this relaxed space, conversations naturally start, and ideas or findings which would never be thought of in a formal environment develop. I wanted to offer this environment through an MFP." By making the top of the MFP flat, Takeda provided the machine with a place where people can take notes easily or relax while talking. Takeda's vision was of a scene where people gather and participate in knowledge creation.

Takeda enjoys seeing and interacting with objects, so he often travels to events or exhibitions, and also gathers information on a daily basis from the Internet. This ranges from construction to art, advertising and IT. "Although something may look good on the internet, often the real thing can be a disappointment. There are also things which look confusing or contrived, yet when seen directly, they are wonderful due to the attention to detail or finish, although priced moderately" He always checks the final product directly with his own eyes, especially when it comes to texture or the finish. "Resin used for MFPs tend to look cheap, however if polished it will show you its true beauty." Improving the texture and quality of materials is a topic which Takeda intends to focus on in the future.

Other than the flat top of the MFP, there are also other areas in which he has turned his attention. One of these is the control panel, known as the "face" of the MFP. Using "intelligence" as the theme, a delicate frame and curves were used. At the same time the control panel has been made to be as small and thin as possible. By doing this, the paper output is more visible, and taking paper becomes much easier. In addition, after repeated testing and countless feedback from users, the button alignment in increments of 0.1mm was examined, creating a balance of beauty and usability.
Takeda's insistency in creating the concept of a "Knowledge Creation Support Machine" extended as far as the fine details on the control panel. One can only imagine what MFP design he will create next.