Back to [Energy Conservation / Prevention of Global Warming]

Returnable containers are used at distribution centers and for delivery to individual consumers. Disposable paper labels are attached to the containers to show the delivery destination. These labels need to be replaced for each delivery and the paste used to attach the labels must be removed, resulting in large amounts of paper waste being generated. To improve this situation and reduce the environmental impact of the distribution and delivery process, Ricoh has developed the Ricoh Rewritable Laser System by combining its rewritable technology with a contactless laser rewriting system.

In the development process, we were faced with challenges related to contactless printing/deleting, light resistance for outdoor use, and the need to substantially increase the number of times rewriting is possible. The Ricoh Rewritable Laser System has met these challenges to provide a more energy- and resource-saving and user-friendly alternative. The system has already been put into use at our customers’ distribution centers. 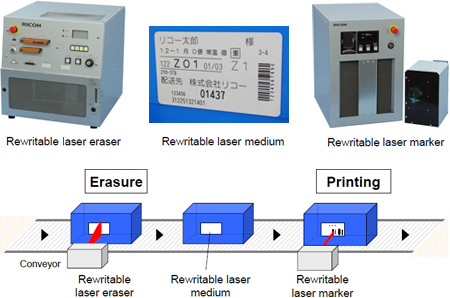 Use of the system at a distribution center of Coop Tohoku will lead to an 80% reduction in CO2 emissions and a 98% reduction in the generation of waste labels.

The Coop Tohoku Sunnet Federation decided to introduce the Ricoh Rewritable Laser System to its new distribution base*, which was officially completed on June 24, 2015. The system has eliminated the need to replace labels and remove the paste used to attach them, which, in turn, helps prevent recurring problems related to sorting caused by a failure to remove old labels. The system is therefore expected to help substantially increase operational efficiency and reduce personnel expenses at the distribution center.

We conducted a life cycle assessment of the rewritable laser medium adopted by Coop Tohoku for its distribution center, targeting all processes from the manufacture of raw materials through to the manufacture, transportation, use, and disposal of the medium. It was revealed that the adoption of the medium will lead to a roughly 80% reduction in CO2 emissions (about 120 tons over five years) and a 98% reduction in the generation of waste paper labels (about 40 tons over the next five years). The Rewritable Laser System thus helps enhance distribution efficiency while also reducing environmental impact.

Comparison of CO2 emissions between thermal paper and rewritable laser

Ricohsells the RECO-View RF Tag Sheet by combining RF tags with Ricoh’s own rewritable technology, making the RECO-View RF Tag Sheet capable of rewriting and displaying data written on sheets. This sheet displays digital data recorded on a tag, and the display changes as the tag is rewritten. A sheet is capable of being rewritten approximately 1,000 times*, making it possible to cut CO2 emissions by 80% across its lifecycle compared to paper-based printing. This tool also helps prevent human error, as operators are able to visually check information on the management of operation processes written on RF tags, and it is currently utilized in a wide variety of areas, including production process, logistics, medical care, and office work.

* This number may vary, depending on the condition of use.