In October 2000, an environmental volunteer group made up of Ricoh employees entered into an agreement with the Hadano City government and local landowners regarding a regional forest conservation project proposed by the group. Named "That's Kirin Saver," the agreed-on project has been ongoing for the last 15 years. Forest conservation activities are organized on a monthly basis by a volunteer group consisting of current and former employees of the Ricoh Group as well as local residents. The target area stretches over 10,000 square meters of land surrounding Lake Shinsei, located in the Shibusawa hills to the south of Hadano City. The area includes outdoor recreation spots that are popular with local fishermen, trekkers, bird-watchers and others. On each activity day, group members work together at a determined location to restore the thickly covered, heavily wooded land to conditions able to meet the different seasonal needs of diverse species, including plants, insects and birds as well as humans.

That's Kirin Saver activities are planned in accordance with the cycle of seasons. Major tasks conducted from spring to summer include weeding to allow the sun to reach ground-level vegetation and promote its growth and other forest maintenance work as well as creating wood chips. In autumn, flora and fauna surveys are carried out, which is followed by the late autumn activity of raking up fallen leaves. The coldest period, from late November to the end of winter, is the season for forest thinning. Some of the thinned trees are then used as logs for cultivating shiitake mushrooms, with spawn inoculation performed in February. In combination with these forest maintenance undertakings, a number of seasonal recreational events are also planned, such as tree climbing, mushroom inoculation, and rice-cake making, with the intention of facilitating local community activities.

The forest conservation project has progressed steadily over the last 15 years, creating appropriately wooded sites as well as open spaces intended for local community activities, among other achievements. Current efforts are focused on hillside areas leading up to the lake. Additionally, project members have begun to visit other prefectures to join similar activities and exchange information with the host groups. Thus, That's Kirin Saver initiatives are expanding to other regions of the country. 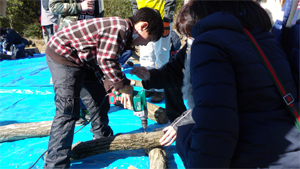 On April 21, 2012, the Chiba Fureai-no-Mori Conservation Group conducted its 77th activity in the Ricoh Chiba Fureai-no-Mori forest in Wakaba-ku, Chiba City, with 11 participants, consisting of employees of Ricoh Japan, Ricoh Technosystems and other Ricoh group companies and their families. On the activity day, the volunteers worked in two groups, engaged in different tasks. One group planted seed potatoes, sowing half-cut potatoes along ridged rows after treating the exposed faces with charcoal that has natural antiseptic property. The other group focused on thinning out unwanted trees and collecting the resulting leftover wood. In the 2012 spring event, held on a sunny day when cherry blossoms were in full bloom in the surrounding areas, the participants enjoyed seeing lush greenery and beautiful flowers while working in nature.

The Chiba Fureai-no-Mori Conservation Group started its activities in 2004, when it entered into an agreement—based on Chiba Prefecture’s ordinance on conserving rural landscape—with the forest owner, who was looking for help with the maintenance of his cedar forest, which was plagued with rampant bamboo. Since then, the volunteer group has been working mainly in the following three areas: (1) weeding to promote the growth of forest trees, (2) creating space to build recreation facilities, and (3) using the timber from thinned out trees to build the recreation facilities. 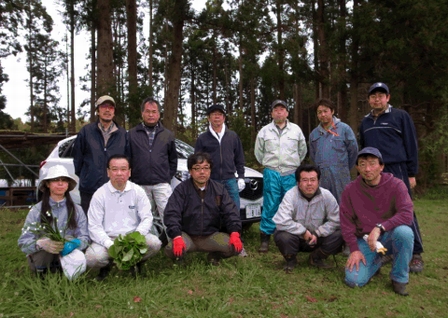 Participating employees and their families

On May 5, the Children’s Day in Japan, in 2012, the Yadoriki Shinboku Group participated in the Kodomo-no-kaze Festival*1 held by Midori-Kawa-to-Kaze-no-Kai*2 in a space on the Tsurumigawa river bank close to Kamoi Station in Midori-ku, Yokohama City, offering a workshop of creating bamboo flutes that attracted around 140 children. This cooperation event was proposed by a member of the both groups. The children worked to create simple instruments by hand and looked exhilarated to hear their finished flutes produce sound.

The Yadoriki Shinboku Group is an environmental volunteer group of Ricoh employees that started its activities in 2001, when Kanagawa Prefecture launched its Forest Development Partnership Program. While initial activity revolved around the conservation of Yadoriki spring, the group has expanded its activities since 2006 to include the management and monitoring of a mixed forest (including zelkova trees) in Tanzawa-Oyama Kanagawa Prefectural Natural Park, as well as the development and management of many bamboo forests in the prefecture.

See more details about our concept for Conservation of Biodiversity