TOKYO, September 18, 2015 — Ricoh today announced the start of a forest ecosystem conservation project in Mexico in the Encrucijada Biosphere Reserve and the Mar Muerto Lagoon, which stretches from the state of Oaxaca to the state of Chiapas. The project is being conducted in cooperation with BirdLife International Tokyo (Representative: Keiko Suzue).

The selected areas are crossroads on the American Flyway and Pacific Flyway routes taken by migratory birds. They represent an important habitat for many endangered species migrating along the Pacific coast and the Gulf of Mexico. However, it is strongly feared that aridification caused by the logging of mangrove trees, the construction of waterways and banks, and pollution caused by waste will harm the wetland ecosystem. In addition, in recent years hurricanes and other natural disasters have also caused damage, including harm to the local fisheries. The promotion of efforts to conserve the mangrove forests is expected to spur the recovery of the wetland ecosystem, mitigate the damage caused by natural disasters, and improve the lives of local residents. This project will be promoted by Pronatura Sur. A.C. (PSU), a Mexican organization that partners with BirdLife International. In the first three years of the project, the following three actions will take place: 1) expanding the afforestation areas, 2) building and managing a system for conducting research on the mangrove forest ecosystem, 3) conducting activities to improve the livelihood of the local residents by using the restored mangrove forest in a sustainable manner. These initiatives over a three year period are seen as pilot activities. The results will be reflected in a plan to expand the afforestation areas in the future. 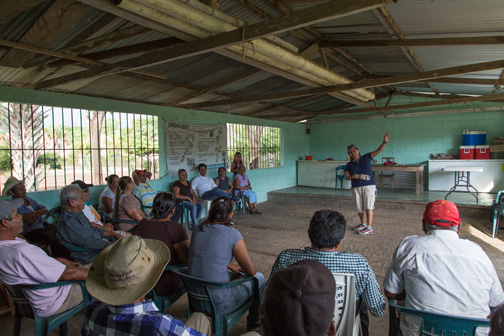 Since 1999, Ricoh has been working in partnership with environmental NGOs and local communities to promote forest ecosystem conservation projects, particularly focusing on regions where biodiversity is richest. Funding for the project is provided by the Social Contribution Reserve*. More than simple afforestation, the project intended to build a framework for sustainable forestry management that aims to protect the habitat for local species and the lives of the local people. It is characterized by a relatively long period of support, rooted in the understanding that forest ecosystem conservation cannot be realized in a short period of time. "Similar projects are currently being conducted in Russia, China, Malaysia, and other countries. The project in Mexico represents the fourteenth forest ecosystem conservation project," said Shigeo "Sergio" Kato, Ricoh's General Manager of Sustainability Management. "We will continue to expand the range of biodiversity conservation activities through programs that involve all stakeholders including local communities."

One forest restoration project started in 2007 in Boa Nova, an area with lowland tropical forests along the Atlantic Ocean, has recently entered the independence phase, with eight years of support ending in July. In Boa Nova, the habitat for plants and animals was on the verge of destruction, with 10 bird species, which is 6% of all threatened bird species in Brazil, facing the threat of extinction. The area of the forest had shrunk to about 7% of its original size due to destruction caused by illegal lumbering, plantation construction, slash-and-burn farming, overgrazing, and other causes. The Boa Nova project promoted the use of gas and other alternative forms of energy in place of firewood, and encouraged people to plant trees and preserve the remaining forest. It also promoted bird tourism, environmental education for children, and other activities to help establish a recycling-based society in which residents can coexist with the forest. As a result of these efforts, the area was designated a national park in 2010, and the Brazilian government allocated funding in recognition of Ricoh's long-term support, ensuring the prospect for large-scale afforestation. In addition, the government of Boa Nova municipality issued an environmental declaration concerning community development. Our project has led to other significant achievements in environmental conservation. Noel Mendes Oliveira, Director of Environment and Water Resources at Boa Nova said "SAVE Brasil's projects in Boa Nova, supported by RICOH, have had great relevance not only concerning bird conservation, but also in planning a future that foresees the sustainable use of our natural resources."

*Ricoh's Social Contribution Reserve
Ricoh's Social Contribution Reserve system was established to ensure stable, long-term social engagement. Following approval at the 1998 shareholder's meeting, Ricoh introduced the social contribution reserve system, under which a portion of profits is disbursed to the reserve's fund after approval by the board of directors. Currently, the fund is being applied to programs such as Ichimura Nature School Kanto, Ricoh Science Caravan, and the Forest Ecosystem Conservation projects. The "Mangrove Forest Recovery Project" in Mexico was also approved at the shareholders meeting held on June 19, 2015.