Eco-billboards to be installed in four locations around the world

Tokyo, July 10, 2014 - Ricoh Company, Ltd. (President and CEO: Zenji Miura) is switching the power source of its billboard installed on the roof of the San-ai Dream Center Building at the Ginza 4-chome crossing in Tokyo to private power generation by solar and wind power, making it a 100% eco-powered electronic billboard. Completion is scheduled for the end of August 2014.

To date, Ricoh has installed 100% eco-powered electronic billboards in New York*1, London*2 and Sydney*3. Changing the billboard in Ginza will mean that the Company has installed eco- billboards in each of its four marketing regions around the world, including the Americas, Europe, Asia Pacific & China and now Japan. (In Japan, a 100% eco-powered electronic billboard was installed in Kita-ku, Osaka in April 2003, though it was removed in June 2011 when a new building was built in front of it.)

Since eco-billboards use no external power supply, depending on the weather they might not always light up. Ricoh thus hopes to encourage environmental awareness among the public and to take a further step toward a sustainable society, rather than merely promoting the Company name. Installing these billboards is part of the the Company’s strategy, focusing on natural energy to communicate its corporate stance. By using the 100% eco-powered electronic billboard on the San-ai Dream Center Building, a landmark in the Ginza, which is the commercial center of Japan, Ricoh hopes to encourage as many people as possible in the country and eventually the entire world to remain aware of energy conservation. 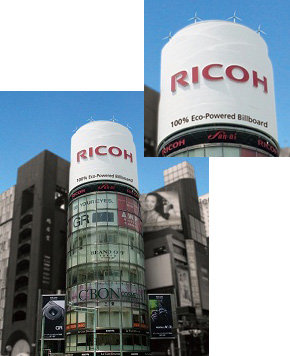 Under the new configuration, the billboard will be lit by using electricity stored in 20 batteries, generated by 78 solar panels and four small wind turbines. The average daily power generation is calculated as approximately 39,000 wh per day.

All employees of the Ricoh Group are united in their efforts to move forward with initiatives to lower the Group’s environmental impact, with the ambitious goal of reducing it to one-eighth of the Fiscal Year 2000 levels by 2050. The Group has aggressively made full use of natural energy in areas other than the eco-board. Ricoh began purchasing Renewable Energy Certificates in 2002 and adopted eco-powered systems at the Numazu Plant in 2006 and at a US production subsidiary in February 2011.