Tokyo, May 29, 2014— The Ricoh Group will position a whole month, starting on Sunday June 1, as “Ricoh Global Eco Action Month,” with the aim of raising environmental awareness and improving understanding, and actively engaging in environmental conservation activities. As part of these activities, Ricoh will turn off the lights on all billboards and Ricoh logo signboards at all Group companies around the world on Thursday June 5, to coincide with United Nations World Environment Day. Understandably, the 100% eco-powered billboards in New York, London and Sydney will be excluded from this initiative.

“Ricoh Global Eco Action” began in 2006 as an environmental event aimed at raising awareness among group employees all over the world, and has continued to encourage employees to think and act in an environmentally friendly manner since then. The theme for this year’s event, now in its ninth year, is “Sharing the ‘eco mind’ together” As well as taking every opportunity to encourage participation in activities and sharing information via various different media, the aim is to join forces with employees, families, friends, local residents, and customers to develop the scope of eco action on an even larger scale.

Other initiatives will also be taking place, in addition to turning off signage. As part of Ricoh Global Eco Action Month, the Ricoh Group will be asking all employees to sign an eco declaration, showing their commitment to actively participating in environmental activities at home and in the community as well as in the office, and encouraging employees to come to work wearing green clothes and accessories on Thursday June 5, to mark United Nations World Environment Day. Ricoh will work with government agencies and other companies all over the world to organize Eco Action Day events and encourage customers to set their MFPs, printers and other devices to Eco Mode, and is also planning activities in cooperation with local communities.

Again this year, the Ricoh Group will continue to carry out Ricoh Global Eco Action as a springboard to promote environmental initiatives and awareness activities all over the world. 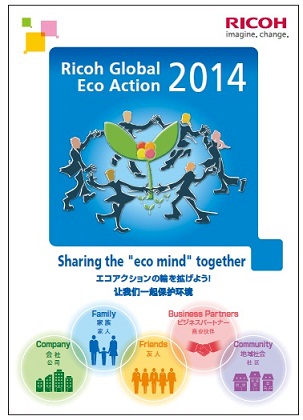 ‹Eco-Powered Electronic Billboards›
As with “Ricoh Global Eco Action,” the eco-powered electronic billboards excluded from the upcoming switching off of signage represent one of the measures being undertaken to “expand the circle of global environmental conservation.” The initiative is based on the idea that “even if the billboards don’t light up and fulfill their functions as signage due to weather, we hope that the message the billboards convey will raise many people’s environmental awareness and lead to the realization of a sustainable society.” Experimental lighting began in April 2009, and following the completion of the first billboard at Times Square, New York in 2010, additional billboards were installed in June and July last year in London and Sydney, respectively. The average combined power generation of the three sites has been calculated at approximately 150,000 wh per day.