TOKYO, Japan - August 29, 2019 – Ricoh Company, Ltd., (Tokyo, Japan) today announced that it has joined a group of international companies who have pledged to tackle inequality and promote diversity in their workplaces and supply chains.

The Business for Inclusive Growth (B4IG) coalition is spearheaded by Emmanuel Faber, Danone Chairman and CEO, and brings together 34 leading multinationals with more than 3 million employees worldwide and global revenues topping $1 trillion. Ricoh and the coalition members have agreed to sign a pledge*1 to take concrete actions to ensure that the benefits of economic growth are more widely shared.

B4IG coalition members will tackle persistent inequalities of opportunity, reduce regional disparities and fight gender discrimination. Companies have identified an initial pool of more than 50 existing and planned projects, representing more than 1 billion euros in private funding, to be covered under the initiative, sponsored by the French Presidency of the G7 and overseen by the OECD.

The B4IG*2 initiative was presented to French President Emmanuel Macron during a meeting with business, charity and industry and leaders at the Elysées Palace on Friday 23 August.

The platform consists of a three-year, OECD-managed programme. 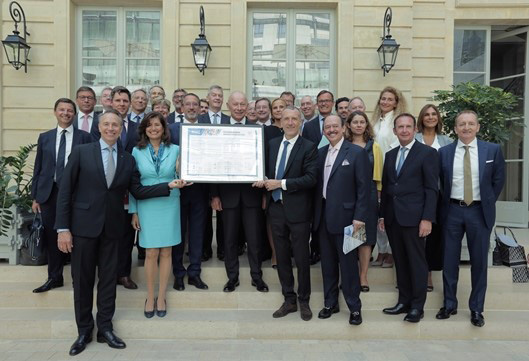 OECD Secretary-General Angel Gurría said: “Growing inequality is one of the biggest social challenges in the world today, perpetuating poverty, undermining social cohesion and trust. Sustainable economic growth means inclusive economic growth. It means giving every individual the opportunity to fulfil her or his potential, the chance not only to contribute to a nation’s growth but to benefit from it, regardless of their background or origins.”

Jake Yamashita, President and CEO of Ricoh, said : “Ricoh is committed to a sustainable future. We have already announced our focus on five material issues aligned to the SDGs, we have committed to zero greenhouse gas emissions by 2050 and are the first Japanese company to join RE100. B4IG is aligned with our values and strategy and we are happy, in collaboration with some of the world’s most prestigious companies, to be the first Japanese company to sign-up to tackle the issue of inequality.”