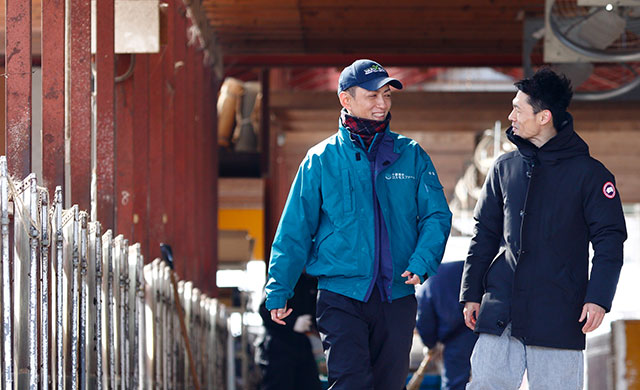 Japan’s primary sector faces numerous issues that ultimately affect consumers. Producers are aging and often have nobody to take over after retirement. The sector faces looming safety and security requirements.

There is also the challenge of contributing to the nation’s food self-sufficiency. Ricoh’s Field Data Business? decided to tackle a manpower shortage among farmers by developing Ricoh CowTalk, a cattle herd management system that employs advanced sensing and computing technologies. Ricoh is trialing this setup.

Ricoh acted because it concluded that technology has yet to fully penetrate the Japanese agriculture and livestock areas and make them more viable. It wanted to empower famers to take advantage of its advanced offerings. The challenge was to develop a system that cuts costs without impeding farm operations or the livestock health. 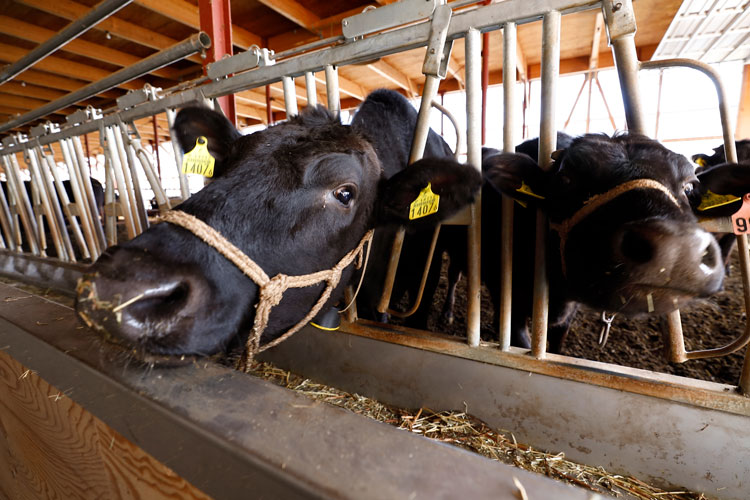 Kosmos Farm is around 45 minutes’ drive from Tokachi-Obihiro Airport. It is near Shimizu-cho in Kamikawa-gun, Hokkaido, which is packed with beef farms. The cattle are impeccably cared for, with shiny coats and friendly faces.

Mr. Hoshi drives around Hokkaido to talk with farmers, academics, researchers, and manufacturers and gain insights into their needs. He says, “Barn structures, farming techniques, and worker education vary among operations. I learned that the faces of cattle show how well they are treated.“ 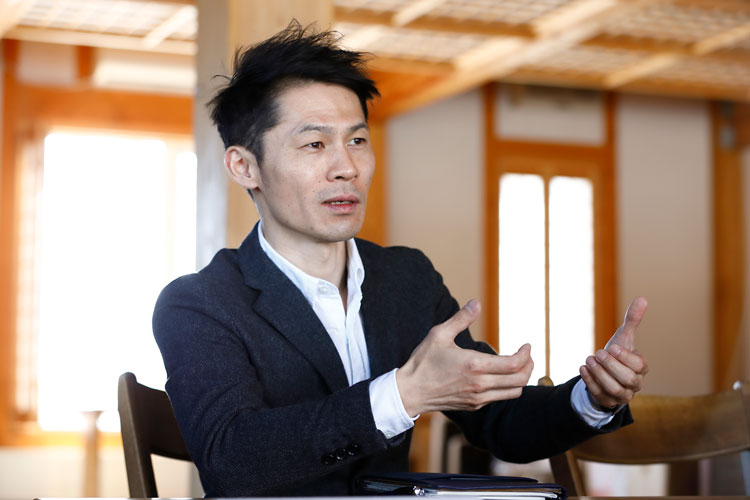 Mr. Hoshi spends travels a lot around Hokkaido to learn more about what farmers, academics, researchers, and manufacturers need.

Kosmos Farm houses 2,400 cows in 20 barns across eight hectares. It provides a special feed grown using microbial fertilizers. First-time visitors are surprised to find the barns free of the regular odors of such facilities. This makes the work environment more pleasant for workers and reduces stress among the animals. 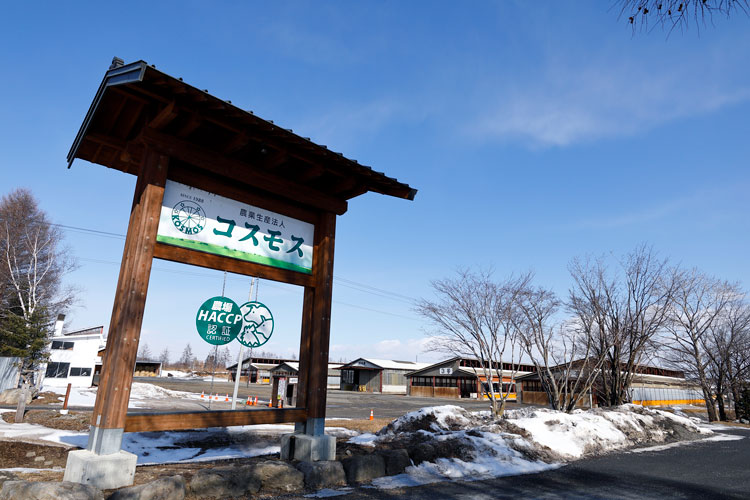 Kosmos Farm maintains 20 barns on its eight-hectare property. This innovative beef farm was the first in the Tokachi district to obtain Hazard Analysis and Critical Control Point certification.

The 39-year-old Mr. Ando oversees the farm. He has a unique background among such managers.

He was disinterested in taking over this business from his father, who started it. He obtained graduate and post-graduate degrees from a university in Tokyo. He then furthered his education in the United States, marrying a woman he met there.

After returning to Japan, he worked at the Shonan Academic Research Center of the Kanagawa International Foundation for three years. He then returned to Hokkaido for the birth of his first child and took up an appointment with Obihiro city office. He had no intention of looking after the family business. 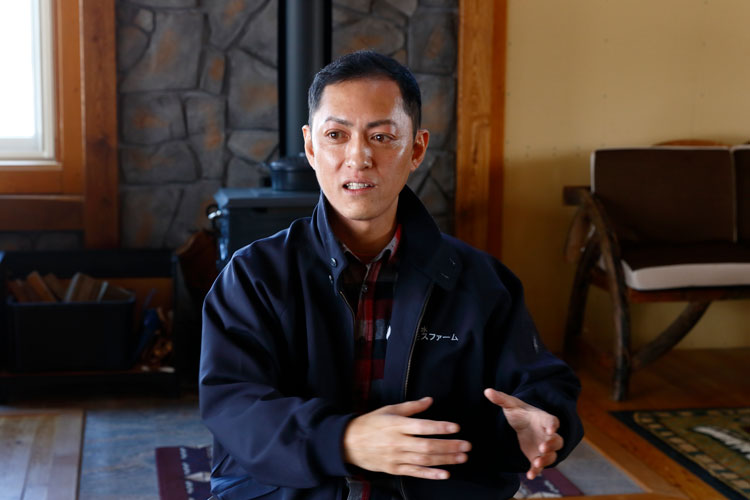 Mr. Ando took up the challenge of managing Kosmos Farm to keep it viable for years to come.

Mr. Ando explains that, “Beef farming is about raising animals and ultimately slaughtering them. As a child, I always thought I couldn’t do that. But money from that business funded my education. I was torn between these two realities.

My mother and workers from her generation find it easy to consider cattle both cute and delicious. I just could not see things that way, so I decided not to become a beef farmer.

That situation changed, however, in 2014.

Mr. Ando says that, “The Trans-Pacific Partnership was a game changer. I thought the farm would collapse and workers would lose their jobs if everything was business as usual. Globalization has removed safe havens for beef farming. My father started this farm in 1987. He was killed in a car accident two years later. My mother and the workers kept everything running for 30 years or so thereafter. I couldn’t just do nothing, so I decided to try keeping Kosmos Farm alive. Once I did that, I was able to eliminate my feelings of guilt. So, I stepped up to the plate.” 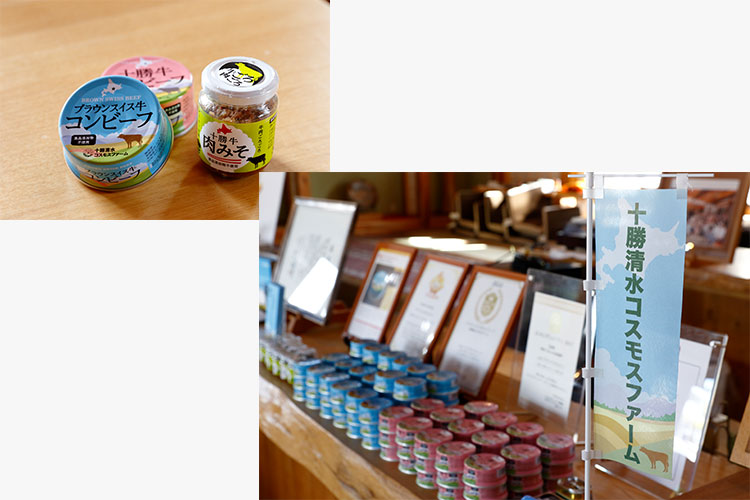 CowTalk measures cud chewing, movements, motionlessness, and other basic elements of cattle behavior around the clock. The system manages information on individual animals and tasks, confirming and sharing the information with farm management and workers wherever they are. 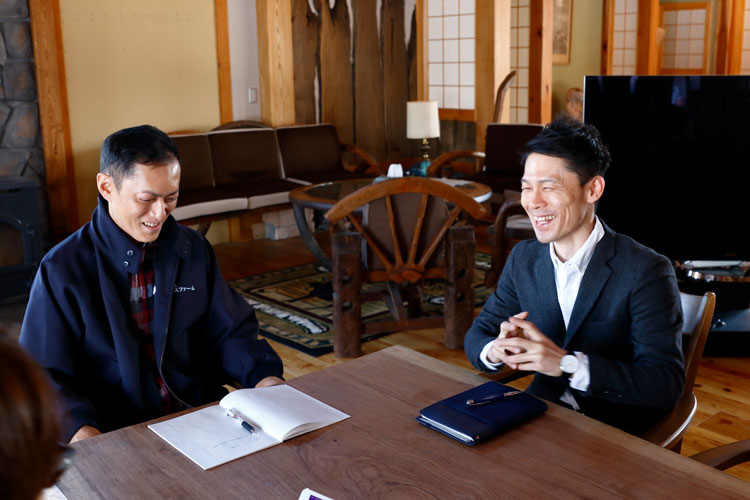 A fortuitous encounter with Mr. Ando, who returned to farming after taking up other pursuits contributed much to the development of Ricoh CowTalk.

Mr. Hoshi recalls that, “We initially looked to come up with a 3D data business drawing on Ricoh’s proven stereo camera technology. In considering the value of 3D data, we locked onto measuring meaningful information that changes daily. We happened to think such measurement could apply to cattle. But then in developing our marketing plans we realized that we knew next to nothing about cattle and beef farming. So, instead of spending a lot of time developing a camera we opted for a sensor system that would allow us to roll out a product more quickly. We then set about learning as much as we could about cattle.

“In gathering information from discussions with farmers as part of our fieldwork, we realized that they had a lot of issues. Many of these people were getting old and had nobody to take over after retirement. We wanted to help enhance efficiency and animal health and improve working conditions by giving farmers access to better information. We met Mr. Ando at Kosmos Farm when our zeal for farmers and the business was intensifying.” 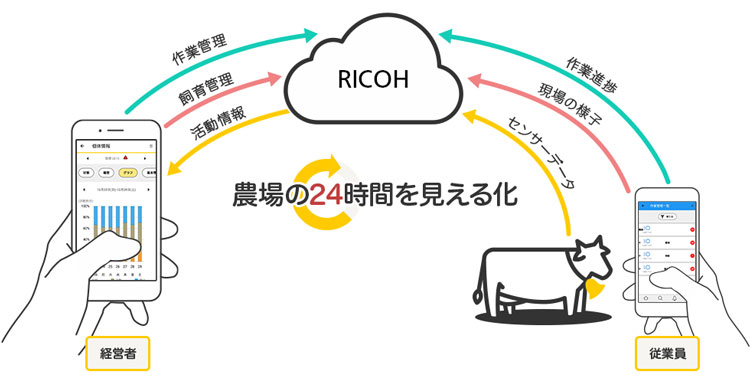 Ricoh CowTalk employs sensors on animals’ collars to communicate with an app via repeaters. It enables farm managers and workers to assess how cattle are faring.

Even before meeting Mr. Hoshi, Mr. Ando was considering a sensor-based herd management system to streamline farming. One issue, however, was that existing systems used Bluetooth and other short-range wireless setups. Mr. Ando would have to install numerous repeaters just to cover the barns, a costly proposition. He also thought about using a system for grazing, so he would need even more repeaters. He concluded that the expenses made everything were out of the question. 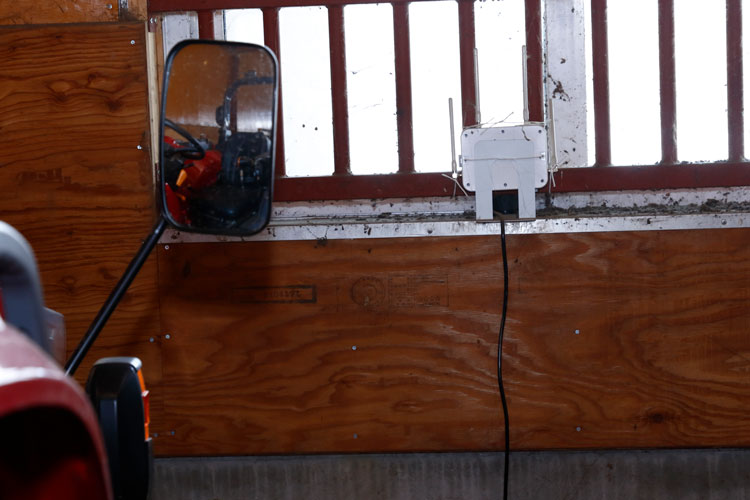 This Ricoh CowTalk repeater installed in this barn is much smaller than the truck mirror beside it.

When he proposed Ricoh CowTalk to Mr. Ando, Mr. Hoshi eliminated the issue of repeater installation from the outset. Processing data inside sensors made it possible to employ a low-power wide-area network. Mr. Ando was thus able to obtain cattle data 24/7 over the entire property without having to spend a lot on device installation. The recorded data goes to the cloud for 24 hours for analysis. 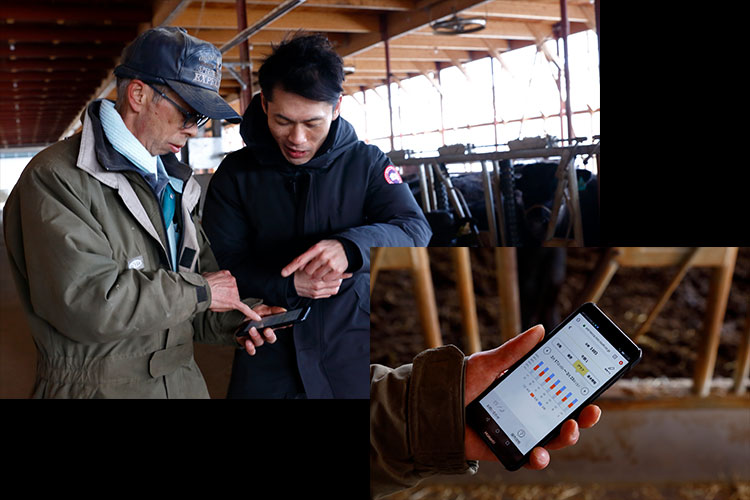 Mr. Hoshi and a worker using Ricoh CowTalk to assess an animal’s condition.

Mr. Ando says that, “I think that productivity is less of a focus for Japanese beef producers than their overseas counterparts. I want to be more conscious about the quantity of top-quality meat per worker to stabilize farm management and the livelihoods of our people.”

He adds that, “An employee’s experience is fundamental to checking the health of cattle. Internet of Things devices supplement such work. If we can pinpoint when a cow will come on heat, we can calve once a year. A device might alert us to help immediately if an animal’s head is stuck between bars. Protecting a cow, raising it healthily and assisting with calving will enhance productivity. I want to draw on technology so all cows have healthy and happy lives.”

Mr. Ando says no workers opposed the deployment of Ricoh CowTalk. It was somewhat surprising for a new business like Ricoh’s to enter and settle into a conservative field like cattle farming. 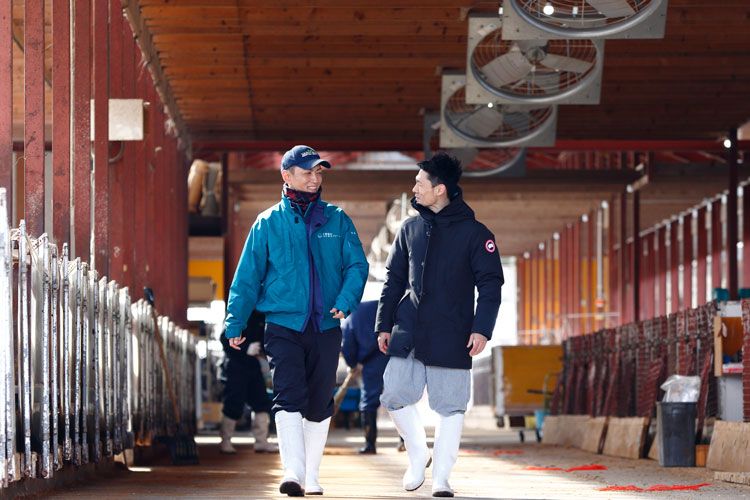 Mr. Hoshi and Mr. Ando met at an agricultural event and have since become firm friends in the course of trialing Ricoh CowTalk.

Mr. Hoshi says that, “Ricoh focuses not just on functionality or precision but also on ways to make technology work for beef farmers. So, it’s important to visit farms frequently. Some farms have conventional offices. Others might have home offices. Their issues vary. Sometimes, we sit down for a solid five hours at a coffee table to hear people out. We might speak with managers as well as workers who may be experienced with Ricoh CowTalk or new to it. If a user finds a particular operation difficult, we try to fine tune things from that person’s perspectives. We try to make apps user-friendly and convenient. We certainly don’t want to just dump products on users and leave them stranded.”

Mr. Ando says that, “As a manager I try to create a positive workplace pace. It would be pointless to exhaust everyone just because management wants an innovation for its own convenience”.

In the interview, both men emphasized thinking from the perspectives of others in describing their approaches. When that was pointed out, they both happily concurred that they undertook the Ricoh CowTalk trial because they believed that building mutual trust would underpin the development of this new business. 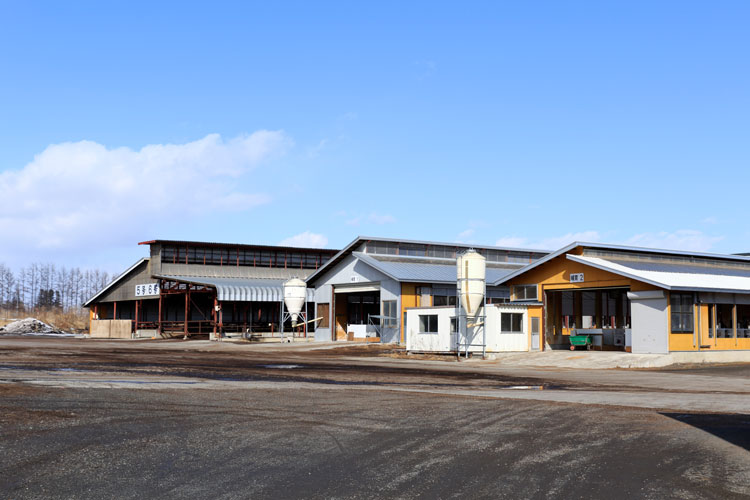 How might Ricoh CowTalk transform cattle farming in Japan once it takes hold?

Mr. Hoshi thinks that there would be fewer accidents and illnesses from being unable to keep tabs on animals. He also believes that the system will benefit aging workers who find patrolling barns several times a day too demanding. He also reckons that the system will lower the barriers to starting beef farming businesses.

Mr. Ando notes that there would be fewer missed breeding opportunities when cows are on heat, which would help increase wagyu production volume and help Japanese farmers become more internationally competitive. He looks for beef farming to offer workstyle and lifestyle choices comparable to those of city jobs through the use of this system. 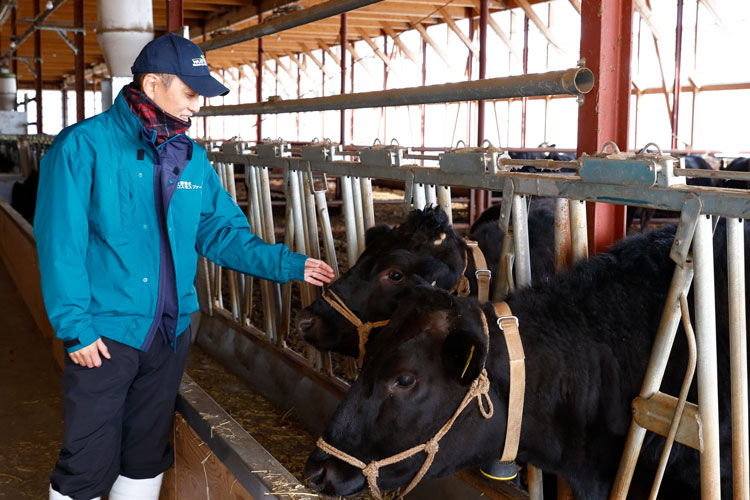 Mr. Ando is committed to keeping his animals healthy and happy throughout their stay at his farm.

Mr. Ando still has mixed feelings about producing raising cattle for eating, so he devotes his energies to providing tender loving care so the lives of these animals are as happy as possible until when they leave the farm.

Ricoh CowTalk has much to offer in a Japanese beef farming industry suffering from an aging and shrinking workforce. Mr. Hoshi and others from Ricoh’s Field Data Business Office are determined to commercialize the system as fast as possible to provide around-the-clock protection and healthy environments for farmers and their cattle. 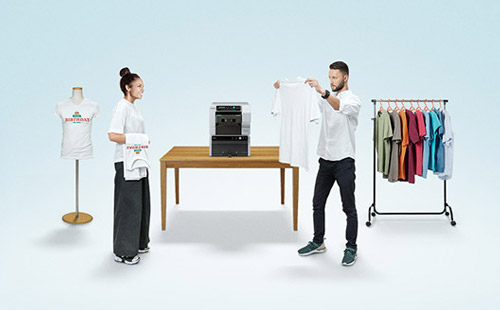