Ricoh’s contribution towards an Eco-Friendly Future through Energy Harvesting Devices.
What does "A World Without Charging" created by Ricoh look like? 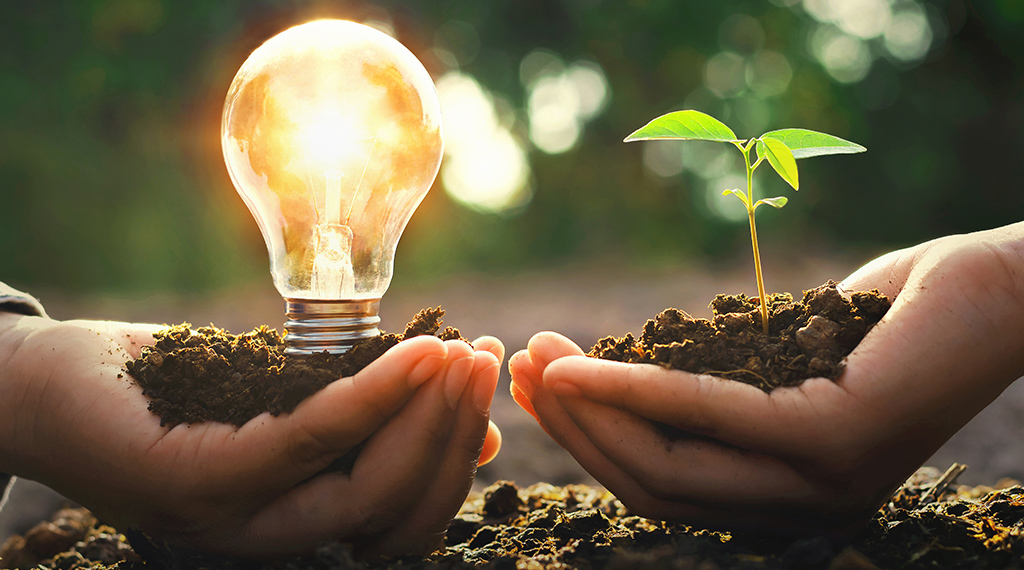 The penetration of the Internet of Things (IoT) and digital tools have made charging devices a challenge for many people. Cellphones, laptop PCs, electric vehicles, and numerous other technologies require electricity for continuous operation but are not always accessible depending on location or timing. That has likely inconvenienced many people.

This situation has fueled a growing need for stand-alone power systems. One solution is next-generation solar cells, which Ricoh began developing in 2013. To learn more about this technology's features and commercial prospects, we spoke with Tetsuya Tanaka, general manager of the Energy Harvesting Business Center, whose team spearheads solar cell development as part of the RICOH Futures Business Unit.

Leveraging solar technology in pursuit of a world without charging

The energy harvesting technology business is a new business for Ricoh. This technology encompasses collecting energy from light, heat, vibration, and other sources and converting them into electricity. As part of its Sustainable Development Goals initiatives, Ricoh launched a project to resolve power access issues with technology to generate electricity from indoor light.

Power supplies are a social issue drawing global attention. The European Union is looking into phasing out non-rechargeable batteries. Tanaka predicts that “Standalone power systems will soon become essential as the world rids itself of disposable batteries.”

Ricoh’s next-generation solar cells could help resolve environmental issues and materialize its vision of a world without charging.

Remote controls and many other portable devices stop working when their batteries run out of power. It is then necessary to recharge or replace the batteries. Few of us can live without smartphones, which often demand daily recharging, despite inconveniences such as needing to look for places to charge when we are away from the home or office. The future Ricoh envisions is one where indoor light in offices and homes automatically charges portable devices, liberating people from manual charging. 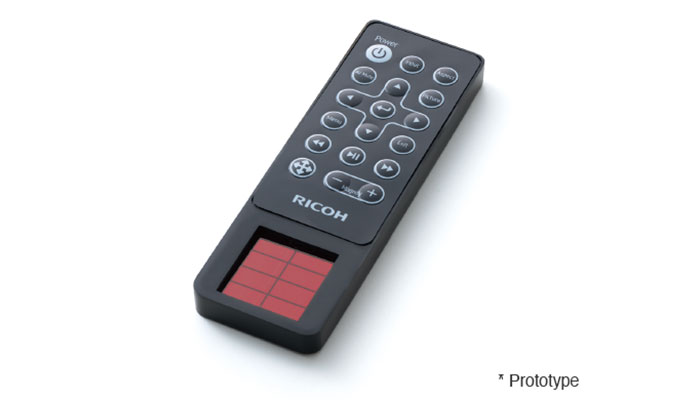 Tanaka says, “Ricoh has always been pursuing ways to improve people’s lives. Our prime goal is to make the world more convenient by using our next-generation solar cell technology, removing the inconveniences that come with recharging batteries.”

DSSCs can generate electricity where indoor lighting is dim, including near office walls and in warehouses and factories. Light and bendable OPVs can generate electricity over a wider range of illuminance, from indoors to shaded outdoor areas. Ricoh is conducting collaborative research on light, high-performance PSCs with the Japan Aerospace Exploration Agency and Toin University of Yokohama, aspiring to deploy them on space probes and in other applications. 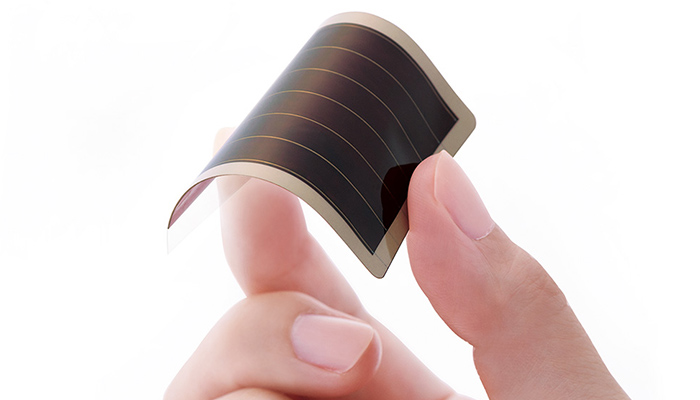 Ricoh’s organic photoreceptor technology has made it possible to generate power efficiently in low light. One application for printers is to read images by shining light on them and leveraging the power of electricity to print toner on paper. This is one way Ricoh’s next-generation solar cell technology is bearing fruit.

Tanaka says, “Organic photoconductors use light to produce electricity, so they function like photovoltaics. Ricoh's research found that this technology delivers the world’s greatest power-generating efficiency with LEDs. I think our involvement in this business is noteworthy because we have been involved in the entire process, from developing materials for organic photoconductors through production.”

Among Ricoh’s three next-generation photovoltaic solutions, OPVs offer the greatest potential to contribute to better living. OPVs can generate power very efficiently in low indoor light levels of around 200 lux through medium light levels of around 10,000 lux in shady outdoor locations. Applications benefiting from the bendable film design range from devices in various shapes to building walls. DSSC-equipped computer mice that do not require battery replacement are already commercially available. Says Tanaka, “We hope to offer new products employing OPVs by the close of the fiscal year ending March 31, 2023.” 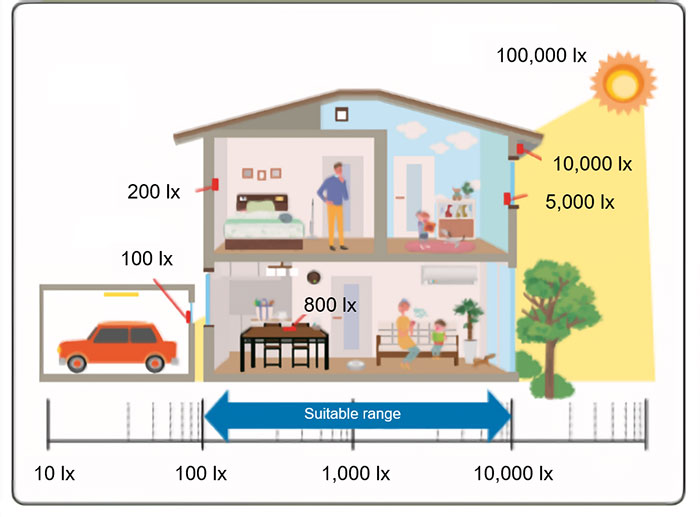 Through developing this technology, Ricoh aspires to have smartphones recharge themselves through its own displays. Tanaka notes, “This display would automatically embed an advanced, highly transparent solar cell to recharge a smartphone by indoor light. OPVs are bendable, so you could apply them on curved displays that companies are commercializing overseas.” He adds, “The generating capacity of existing models of next-generation solar cells is proportional to their surface area, so currently it is not sufficient to recharge a smartphone. That said, the power consumption of some semiconductors has plunged about 99% in the past decade. With new technological innovations, I’d expect consumption to fall even further in the coming years. I think it’s quite realistic to expect automatic smartphone recharging within a decade from now if such technologies and our next-generation solar cell innovations both progresses sufficiently.”

Committed since joining Ricoh to contribute to society, from toner development to creating new businesses

For about 20 years after joining Ricoh, Tanaka has been developing technologies to enhance printer toner production efficiency. He recalls, "When I was working on toner, I never dreamed I’d end up working on solar cells or space technologies.” Still, he says that his fundamental approach to work remains intact.

He says, “In developing toner, I strived to offer convenience for office workers. Even now, I want to help people live better by eliminating recharging hassles. Ever since joining Ricoh, I’ve wanted to contribute to the world through technological development.”

Tanaka’s sentiment is consistent with Ricoh's vision of Fulfillment through Work, created to prepare for its centennial in 2036. As well as seeking to draw on Ricoh’s value proposition to make work environments more comfortable, Tanaka offers this thought to his colleagues. “If we work halfheartedly, we cannot deliver good services. Our project team members are keen to please people with the products they create. To ensure they can provide fulfillment to people worldwide while having fun in the process, I strive to create such a work environment.”

Ensuring durability and minimizing costs are the prime challenges driving the adoption of next-generation solar cells as alternatives to disposable batteries. In the drive to commercialize, it is vital to keep improving the durability of power generation devices that have become more robust. Ricoh looks into reducing costs by optimizing materials and production processes to reach a price range affordable for customers.

One insight of Ricoh founder Kiyoshi Ichimura was that “management should make profitability an outcome of doing business rather than a goal.” He believed that offering what customers want rather than simply focusing on making money would naturally increase earnings. Ricoh’s next-generation solar cell project embodies that ethos.

Tanaka has maintained the following mantra since he began working in the advanced solar cell business. “We cannot stay satisfied with our current business scale if we are to contribute to society. Our operations will naturally expand if we find ways to benefit the world. That’s how we are pushing forward as part of a team that is driving new businesses for Ricoh.”